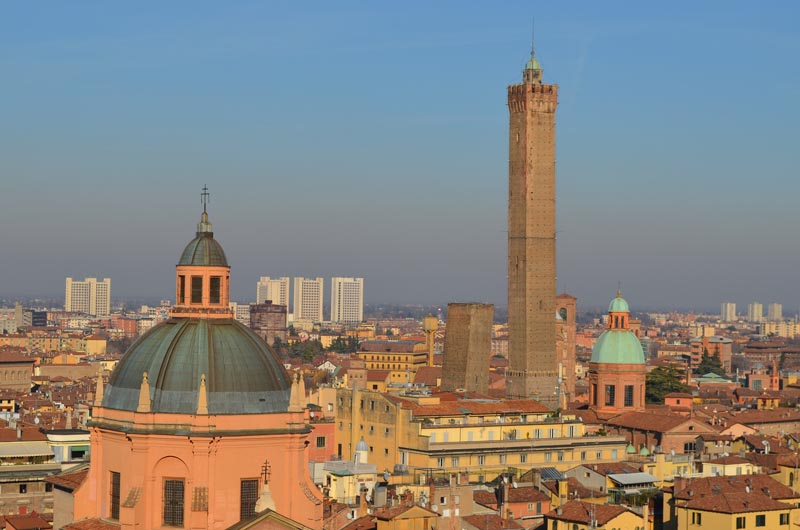 Bologna will enchant you with its wonderful red roofs

An enormous expanse of red roofs, interrupted by some gray / blue chapel and surrounded by the lush green of the hills. The capital of Emilia Romagna is a spectacle for the eyes, standing out in front of the spectator who can only be enchanted. From the Jewish ghetto to the Margherita Gardens, from the university area to the Pratello, the city of Bologna will surround you in a warm and familiar embrace within its walls. All you have to do is fall in love with it.

The love that runs through Bologna

There are many legends connected to the birth of the city of Bologna. According to some, the Ombro Ocno, trying to escape from the Etruscans, founded a small town but was still put to flight again. According to others, it was Bianore’s son, Felsino, who founded the city and, again, his son changed his name to Bononia. The most romantic story, however, attributes to Fero its foundation, an Etruscan king.

Starting from Ravenna, he settled in the Bologna area, an excellent point that offered many opportunities for growth and began to build a village. His beloved Aposa, however, died in a stream that took his name. Even today, in fact, Bologna is called the little Venice, for the canals that run in the basements. Their love, however decisive for the death of the woman, still lingers in the streets of the city, where can be seen channels that cross it.

All the arcades lead to Bologna

If there is no shelter against rain in many Italian cities, the solution exists in Bologna. With more than 38 kilometers of arcades, Bologna will always offer an architectural umbrella to tourists and inhabitants. Sheltered from the rain, sometimes thunderous and sometimes mild, there is a strong desire to get lost in Bologna.

Following the line of the largest porticoes, you will come to Piazza Maggiore which, with its imposing and fascinating statue of Neptune, can be admired and praised. Furthermore, the Basilica of San Petronio emerges powerfully, with its façade half complete with its magnetic charm and the Palazzo dei Banchi joins in with its beauty and, together with Palazzo dei Notai and Palazzo d’Accursio, completes the fabulous Bolognese painting.

The whisper of Bologna: the secrets and legends handed down

Bologna is nicknamed Little Venice and in Via Piella there is a window that gives a view of the Canae delle Moline. Instead, if you put yourself in the arch between the Palazzo del Podestà and that of King Enzo, you will hear what the person is whispering from the opposite side. The road that leads to the sanctuary of San Luca, on the other hand, is the representation of the devil, in his reptile form, defeated by the Madonna and the Sanctuary, besides representing the Virgin, is of an indecipherable beauty and gives the view from above of the city and its hills.

If, on the other hand, you are a superstitious university student, it will be better to look up, in fact, at the Isolani court, in Strada Maggiore, three arrows are stuck on the ceiling, according to legend, thrown by some brigands after seeing a naked girl and, if not manage to locate them, you will probably never graduate!

The city of towers

Bologna, besides being the city of arcades, was the city of towers in 1200 and, even today, is so well known. More than a hundred towers were built to defend the city. To date, however, only 22 can be counted and the most famous are the Torre degli Asinelli and the Torre della Garisenda. The point of arrival of the streets that led to the city gates were the towers and were named after the ancient noble families.

Even here, however, there seems to be an unfortunate place for university students. According to tradition, it is strongly discouraged to climb on it unless you want to play a degree. In the city where the oldest university in the western world resides, there could be no lack of legends and superstitions linked to study. In any case, for all the others, the view below is unparalleled: the red roofs of Bologna will dazzle you with their beauty.