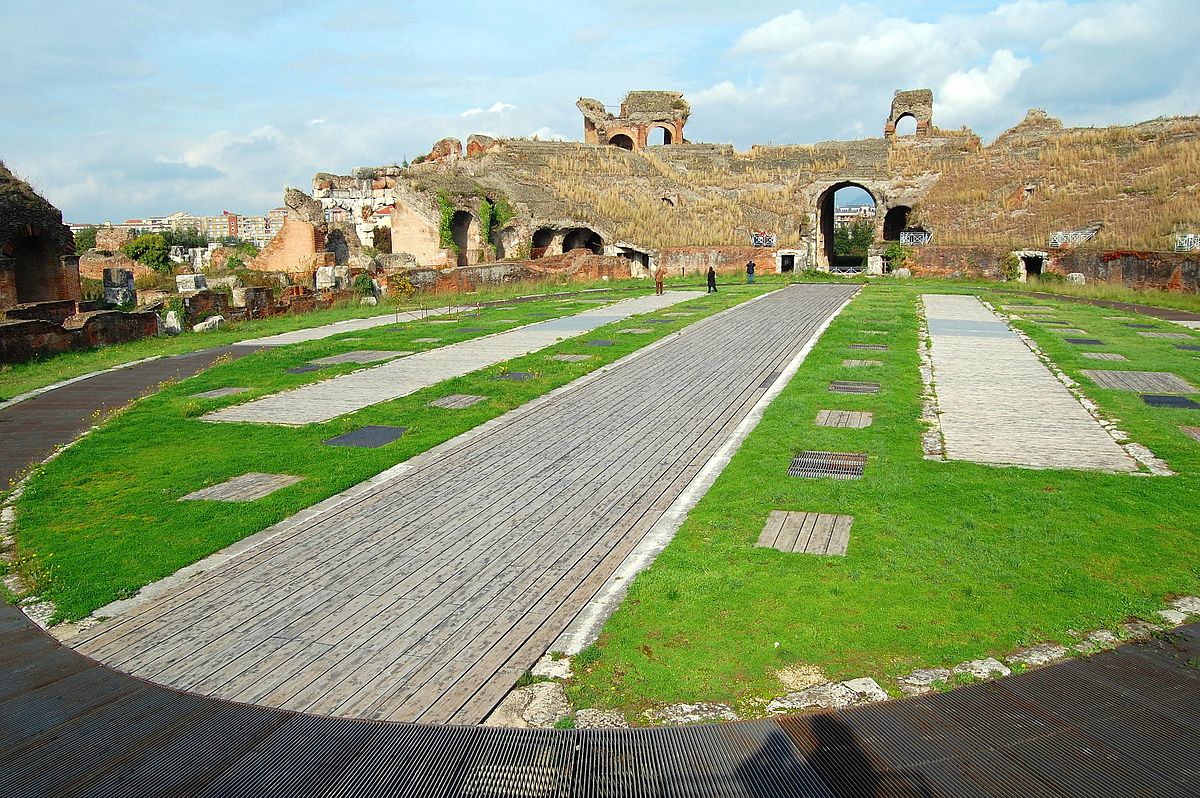 Capua Amphitheater, the Roman Campano Amphitheater of the city of Capua. A jewel that tells of the first school of gladiators and the revolt of Spartacus. An amphitheater that today is located in the beautiful Santa Maria Capua Vetere in the province of Caserta, in Campania. The second in size after the Colosseum. Discovering another wonder located in Italy.

The Campano or Capuano Amphitheater was built between the end of the first century and the end of the 2nd century AD replacing the arena of the Graccana age. In his story he tells us about the mutilated epigraph dedicated by Antonino Pio to Emperor Adriano
“The Colonia Giulia Felice Augusta Capua did, the star Adriano Augusto restored and took care of the statues and columns, the emperor Cesare T. Elio Adriano Augusto Pio dedicated.”

The amphitheater, used for gladiator games, originally stood out with the four canonical orders of battlements (ima, media and summa cavea, attic). The terraces were accessible via external stairs and in-house connected to other levels of tunnels. The façade, moreover, opened with eighty arches made of blocks of limestone of equal width. Those placed at the four cardinal points, on the other hand, were emphasized by semi-columns resting on Tuscan-style pillars.
Wonder and magnificence were shown in the arched keys of the first two orders of bows with as many as 240 relief busts depicting the deities. Unfortunately, only twenty remained at the Capua amphitheater. Few others are kept in the National Archaeological Museum of Naples (such as the Venera di Capua, found in the amphitheater area) and the Provincial Museum of Campania. One of the most fascinating curiosities of the Amphitheater of Capua concerns the proximity of the School of Gladiators. Here began the rebellion of slaves led by Spartacus, the famous gladiator and condottiero trace.

The decadence of the Campano Amphitheater

The amphitheater, after the fall of the Western Roman Empire, was looted in 456 AD. with the sacking of Genserico and in 841 AD from the Saracens who used it as a fortress. Moreover, during the period of the Swabian domination, it became a quarry for the extraction of building materials. Only during the Bourbon era ended the slaughter by intervention of the Superintendent to the excavations Michele Arditi. Numerous, over the years, the interventions for the restoration and preservation of the largest Roman amphitheater after the Colosseum.

Useful information to visit the Amphitheater of Capua

We recommend visiting the Gladiators Museum (attached to the amphitheater) and presenting the surviving elements of the decoration of the Campanian Amphitheater.