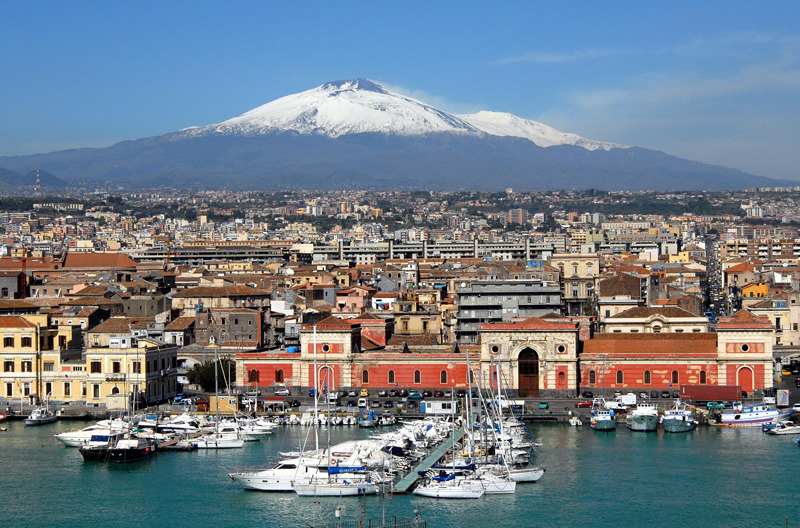 Catania is where the sea and the mountains come together, in a long and sinuous embrace. Between the slopes of Etna and the Ionian sea that is refracted on the coast, the Sicilian municipality welcomes about 700 000 people, as one of the pulsating hearts of the island. It is an unmissable destination for everyone, be they tourists or Italians, it should be visited at least once in a lifetime.

The birth of a name

The first explanations on the name of Catania date back to Plutarch, in fact the city took its name from the Indo-European word katane, or grater. It could be interpreted as a metaphor of the jagged territory due to the lava but according to others, the etymology goes back to the Latin word catinum, to refer to the basin of the Plain on which it faces. Some thought that Catania derived from the Greek prefix katà- joined to the word Etna, to indicate its closeness. Although its origins remain obscure, the city has its prestige and charm clear.

In the city there may be six different facets of equal importance. Its ancient history outlines one of the six souls of Catania: Greek and Roman. Although many traces of the Greek period do not remain, unfortunately, there is certainty through many excavations that it was a goal of the Greeks. The ancient city boasts Roman origins: the Theater and the Amphitheater, the Baths of the address and Anchilliane and also the famous elephant statue belongs to the Roman era, following the legends of the city.

Catania became a medieval city, with Byzantine and Norman influences, whose legacies can still be seen today. The Benedictine monastery and the church of Santa Maria di Gesù make the heart of the Renaissance city beat.

The last three souls of Catania

Lava flows and earthquakes characterize the Baroque period, which is why the architects worked to solve the problem and here Catania became a baroque city, with wide streets, such as Via Etnea, Via Vittorio Emanuele II and Via Giuseppe Garibaldi, and churches rebuilt by famous architects. Then the nineteenth-century city opens up, with the Pietro Antonio Coppola Theater and numerous fountains in the 60s in Piazza Alfredo Cappellini and Piazza Giovanni Falcone. Finally, the last soul is that of the twentieth century city, with the Fontana di Proserpina and the Cittadella Universitaria. All six cities beat in unison in the heart of Catania.

The city of the Cyclops

When Homer – or whoever – he told the stories of Ulysses, he did not fail to provide a detailed geographical description and it was near Catania that Ulysses met Polyphemus, linked to the volcanic activities of Etna. The Faraglioni of Aci Trezza should be placed there after the blind fury of Polyphemus, who hurled huge boulders at Ulysses.
The truth fund of this legend lies in the dwarf elephants, among the first inhabitants of the area and disappeared for some time, as their skeletons bear a hole in the front, where they had the proboscis, which was mistaken by men for one eye. Human error but nice legend.

Catania and the subterranean river of the bull

Amenano was a Greek god, half man and half bull, who gave his name to the underground river that flows through the meanders of Catania. You can only see it in some parts of the city, as the eruption of 1669 submerged it, hiding much of it but fortunately, its traces have not been lost and, indeed, have been used to spray the Amenano fountain but you can see in the famous Fish Market of Catania. The most curious place to stop and listen to its rustle and admire it is literally inside the Youth Hostel. Between fire and water, Catania reserves surprises for all tastes. How not to go there?