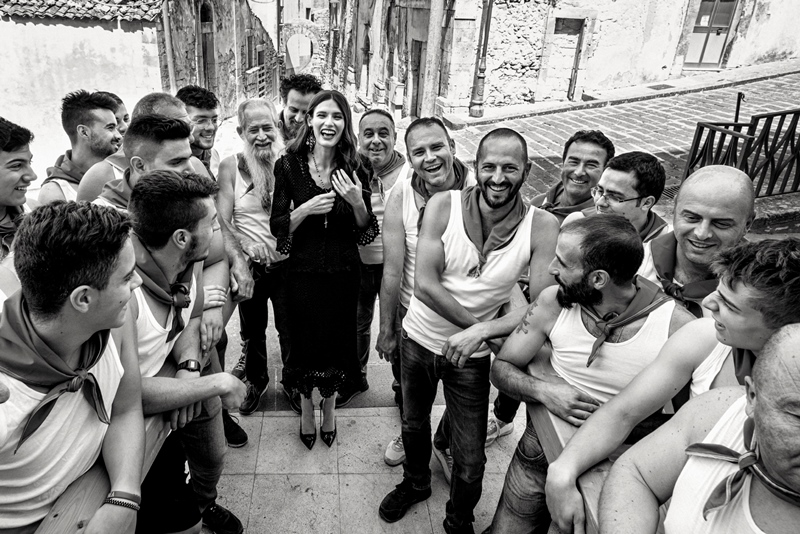 We are in Sicily. We are in a land chosen by an important Italian fashion brand once again. The stylists “Dolce and Gabbana” decided last year to set their advertising campaign once more on the island. Yes, once again, because Sicily is often at the center of their collections, thanks to the warmth, the colors, and the flavors that characterize it. The municipality of Palazzolo Acreide, in the province of Syracuse, was chosen for the spring-summer advertising campaign.

Together with Milan, present with the other shots of the photographer Branislav Simoncik. But, why Palazzolo Acreide? Because the two famous stylists have chosen a Palazzolo photographer, Salvo Alibrio. It is thus that D&G and Alibrio met, and the desire to set the campaign in the South East of the island was born. To find out more, we met Salvo Alibrio, a 31-year-old guy who is already emerging with his own work. Always maintaining the serenity and simplicity that characterize his way of being.

Shooting for the advertising campaign took place last July, as the photographer tells. After a meeting with the two stylists, Alibrio made some inspections in the most characteristic places of Palazzolo. He choosed that places also because, as he told us, he has maintained that common thread, which often characterizes his photographs. Alibrio, in fact, also makes shots of traditional Sicilian festivals. From those that belong to Palazzolo dedicate to the saints, those characterized by the folklore and mystery of other cities in Sicily. Like the “Jews” of San Fratello, who arrived for the occasion in Palazzolo and immortalized in the men’s collection.

“This is why a religious festival typical of Palazzolo has been inserted – says Alibrio – with the shots taken by staging the procession of the saint, with the bearers of the statue and models”. And then again the photos in front of the Annunziata church, with the nuns behind, then in front of the church of the Madonna delle Grazie, with the characteristic flock of sheep. These are not entirely unusual scenes in these areas. And then the shots taken in the Lenza district, or near the balcony of Palazzo Caruso.

The peculiarity of this advertising campaign is the choice of the protagonists. Many remember how heavily armored the set was in those days of July last year. But to be immortalized in those photos, which are traveling around the world, there are also many people from Palazzolo. Young and old, the elderly who play in clubs, women who pray the rosary. The barber. Children.

And for children’s collection – adds Alibrio – the production set a casting in Palazzolo. And among the little ones chosen to make the models there are young people from the village.” Each context was chosen based on the clothes and the result is surprising. “From the beginning – the photographer claims – people, friends, my family, they supported me. I have seen the village enthusiastic about this experience”. And surely these photos will be important to make the this place known even more.

Modernity and tradition in D&G and Alibrio

Milan and Sicily, therefore, color and black and white, modernity and tradition. This is underlined by the fashion house in a note explaining the new collections. Opposites meet in the S-S 2020 Woman and Man Campaign set in the two key places of Dolce & Gabbana which, with their atmospheres and their different scenarios, are the background of these shots. The island is Domenico Dolce and Stefano Gabbana’s main source of inspiration and it is placed next to the city where it all began. Immortalized by Salvo Alibrio, the ADV campaign set in Sicily, in Palazzolo Acreide, is made in black and white, recalling the atmosphere, symbols and traditions of the island.

Enhanced by the depth of the shots and the saturation of the two-tone, the Dolce & Gabbana DNA emerges from the campaign shots with all the history, values and suggestions to which it refers. Scenarios of daily life are flanked by traditional moments of conviviality in the country, becoming a suggestive backdrop to the clothes of the collection. And among the super models portrayed by Alibrio are Bianca Balti, Isabeli Bergossi Fontana and Jessica Stam.

The young photographer chosen by Dolce & Gabbana began to have a passion for photography since he was nine-years-old. After studying in art school, he continued his self-taught training. He has participated in several photographic competitions and in 2012 he received recognition from National Geographic Italy. The victory in the competition allowed him to attend a master of reportage at the photography academy of John Kaverdash. He obtained other awards and published several photo shoots in magazines such as Le Figaro. He also created exhibitions with his shots taken during religious feasts. And we are sure that this is only the beginning. Determined to stay and work in his homeland, Alibrio is demonstrating that cultivate a passion and make it a job full of satisfactions is possible.