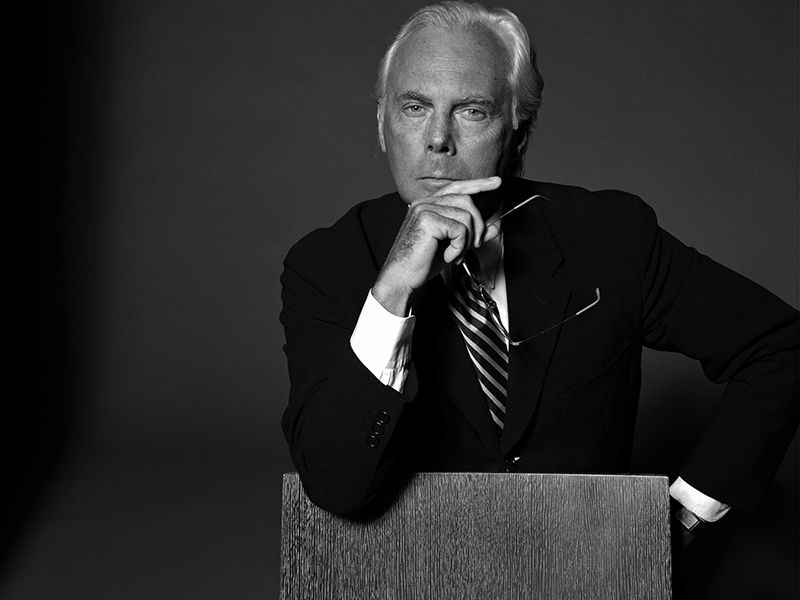 Let’s find out who Giorgio Armani is: the highest paid designer in the world and one of the richest men in Italy. The stylist is 85 years old, of humble origins and a really strong character. Who always swims against the tide.

Giorgio Armani was born in Piacenza on July, 11 1934. He grew up in his hometown with his family and it is here that he manages to attend high school and graduated in 1953. He enrolled in university and for two years he attended Medicine at the Milan State University. As soon as he left his studies, he found a job as a clerk for the department store “La Rinascente”.
During the same period he worked as an assistant photographer until he decided to accept a job in a fashion agency’s promotions office. Here his knowledge in the world of fashion grows, introducing fabrics from abroad not only for the Milanese but for all Italians.

The beginning of his career

Without having any particular experience, in 1965 he was hired by Nino Cerruti to redesign the lines of the Hitman brand. Here he designs a new type of jacket, simpler and suitable for many needs. In the following years he began a career as a “freelance” becoming a fashion designer and consultant for companies in the sector.

In 1974 his name appears for the first time on a leather clothing brand: Sicons with the Armani by Sicons line. Hence the beginning of a thriving career with the personal brand that came after numerous successes and good feedback from the public.

On July 24, 1975, the Giorgio Armani spa fashion house was born and as a start, it launched a “prêt-à-porter” clothing line for both men and women.
In the same year in Florence, in the Sala Bianca, Giorgio Armani presented his first collection. Acclaimed by many and immediately very successful; presents a line of unstructured jackets with leather inserts and very casual dresses.
From those years onwards the successes come one after the other: in 2000 an agreement was signed with the Zegna Group to produce Armani Collections, two years later with Safilo to create a line of glasses with the Emporio Armani eyewear brand.

Not only clothes but also accessories, perfumes and makeup are part of the great empire built by Giorgio Armani.
In 2006 his biography, Being Armani, was published, written by Renata Molho. There are about 60 Giorgio Armani boutiques in 35 different countries, divided among the various sectors of the brand: Giorgio Armani, Armani Collezioni, Emporio Armani, A / X Armani Exchange, Armani Jeans, Armani Junior, Giorgio Armani Accessories and Armani Casa.

A style always remembered for its great class and elegance. These are the features that make an Armani garment unmistakable.
From classic to innovative and design clothes there are many areas in which the collections range. All under a clear guideline: the unmistakable Italian style. His style is inspired by the great black and white films of the 1930s, clean cuts and tones in cold colors: gray, beige, sand or the famous Armani blue.
Both Arab and Eastern culture are of great influence within the collections designed by Giorgio Armani: many Korean collars or large tunic coats presented in 1990.

Sergio Galeotti was his life partner. He believed in him since the beginning of the company they built together. He prematurely passed away and left a void in the designer’s life.
Not many details of his private life are known because he tries to keep it always private.

Let’s see what are the things you don’t know about the famous designer.
1) He designed many of the clothes of the singer Alexia: married to one of his nephew, Andrea Camerana.
2) Ten years later the opening of the shop in via Montenapoleone in Milan, the designer has chosen to return to a store he already owns: “I prefer to go back to the store I own in via Sant’Andrea 9”. About € 15/20 million per year for the store in the famous Fashion District.

3) One of the fabrics that most distinguishes Giorgio Armani’s collections is the black velvet which he himself declares: “It has the power to neutralize everything, ideal for stitching and wrapping.”
4) Both Cate Blanchett and Leonardo Di Caprio have chosen to dress the designer’s garments for a famous Hollywood night: the delivery of the Oscars; Giorgio Armani said he felt totally in line with the style adopted by the actors.
5) EA7: do you know why the number 7? When the brand was created in 2004, they only wanted to create sports clothes and were inspired by the Milan player, Andriy Shevchenko who had the number 7 as the shirt number.

6) In the Made in Italy fiction that tells its true story, the character of Giorgio Armani is played by the actor Raul Bova.
7) If you love his collections, you can find the official brand account on Instagram but, despite his reputation, the designer does not have a certified profile on the same social network.
8) For Sanremo 2019 Armani Privè has made many of the clothes worn by Virginia Raffaele on the Ariston stage.
9) After the damage caused by bad weather in November of this year, the Armani Group decided to donate the proceeds of three meetings of the A / X Olimpia Milano to Civil Protection.

Elegance is not to be noticed but to be remembered …

A few years ago, Forbes magazine declared him the fifth richest man in Italy and among the 150 richest in the world. A heritage built step by step in a long career of over fifty years in the world of high fashion. His most famous words are “Elegance is not being noticed but being remembered”. It is not known what the future of the brand will be, but over the years of his career the designer from Piacenza has certainly achieved great goals. His name will always be remembered as one of the greatest stylists and innovators of Italian fashion of the twentieth century.