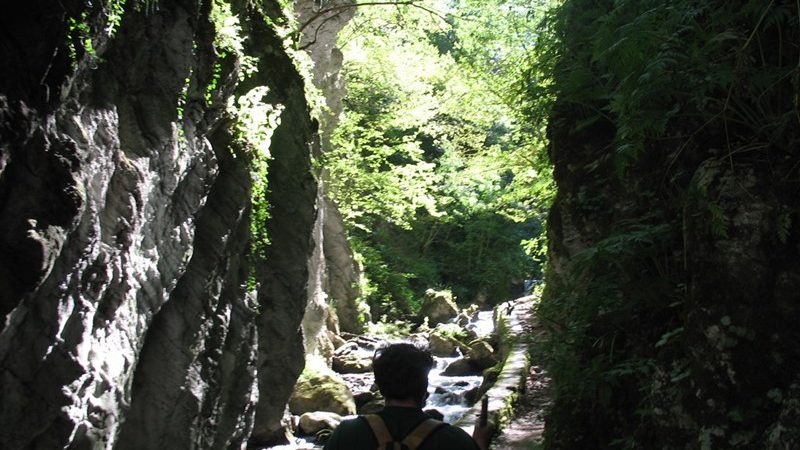 Infernaccio Gorges: journey to the heart of the Marche region

Millennial civilizations have crossed the Italian soil leaving traces of their passage. However, there are still places where humans do not seem to have minimally affected vegetation. One of these is given by the suggestive scenery of the Infernaccio Gorges. Located near the municipality of Montefortino in the province of Fermo, Infernaccio Gorges are set among the beeches of the forest dominating the Monti Sibillini national park. Their formation is due to the erosion caused by the Tenna river over the centuries. It flows undisturbed between Monte Priora and Monte Sibilla.

Gorges of the Infernaccio offer the hiker a breathtaking landscape. Here the dense vegetation perched along the slopes of the surrounding mountains alternates with singular water games. In addition to the scenic beauty, another detail will appeal to the summer tourist, or refreshment! Just what you need on such a hot summer!

Infernaccio Gorges: a walk in the rugged nature

Infernaccio Gorges are one of the favorite destinations for trekking enthusiasts. In fact, every year many tourists come from the Marche and beyond. All ready to discover this wonder of nature! The classic route is about ten kilometers long. Despite some inaccessible features, it is easily passable by experienced and non-experienced walkers, as well as by children. The access point to the route is located in Rubbiano, not far from Montefortino. From here a dirt road will lead you to the valley of the Infernaccio Gorges. Walking towards the destination, the vegetation will be increasingly thick. Step by step you will hear the roar of the Tenna river, but the trees will cover its view, making it even more impressive.

Slowly as you approach the valley floor, you will be caught by an aquatic surprise: the Pisciatelle. They are small waterfalls that fall from the left side of the mountain towards the gorges. They remind of a shower because of their low intensity. At last come to the entrance of the gorges, you will find a path. Following it you will climb between rocks and trees up to a pretty wooden bridge. You will climb over the stream and a forest will appear before your eyes. Concealed among the vegetation you will find the famous hidden waterfall. To you discover it! Between the shadows and the coolness you will continue your journey towards a crossroads. On the left you will continue towards the source of the Tenna river, while on the right towards the Hermitage of San Leonardo.

An intruder among unspoiled nature: the Hermitage of San Leonardo

In the area of the Infernaccio Gorges, the only trace left by man is the Hermitage of San Leonardo. Up there, on one of the highest points of the mountain, stood an ancient monastery. The Hermitage leaves us with clues to an ancient history. In medieval times, the Via del Golubro, a road that crossed the entire Apennines, was the only one that connected the city of Norcia to Rome. As pilgrimages to the capital are frequent, the passage was assiduously frequented. The only problem was the Infernaccio Gorges.

The pilgrims to cross the Apennines climbed up to the Hermitage. They then descended from the other side of the mountain and continued their journey. Thus the Camaldolese monks decided to build their own monastery here. It was not only a place of worship, but offered accommodation and refreshment for travelers heading to Rome. Unfortunately the earthquake of 2016 compromised the structure, which had come back to life thanks to the restoration work promoted by Father Pietro Lavini.