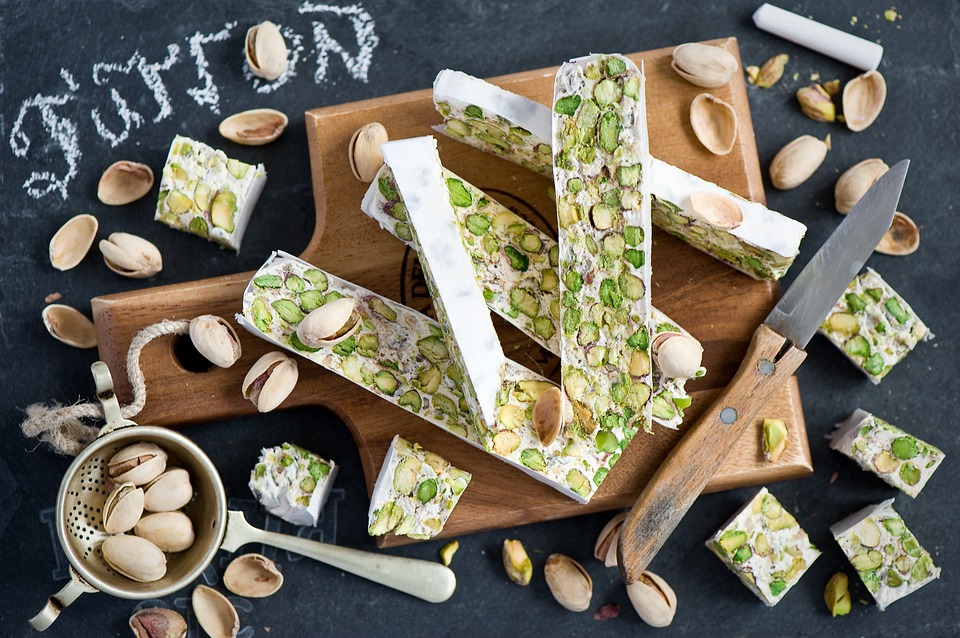 Nougat is an Italian invention, symbol of celebrations, especially on certain convivial occasions. Apicius also talks about it in “De re coquinaria”, and Tito Livio and Marziale also write about it. Just the great Latin poet, localizes the ancient nougat, in the Sannio area, still very famous for the production of cupedia.

For Romans nougat was a dessert made with honey, almonds and egg white, a real delicacy; a “cupedia“, and still today, in the area of Benevento, nougat vendors are called cupetari. Moreover, many Roman sweets were made with honey, which was the greatest sweetener of the time, along with dried fruit. However, from the way Apicio describes it, the ancient cupedia looks more like the current crunch rather than the nougat.

Many try to grab the paternity of this dessert, but its origins are certainly in Roman culture. Following the legend, cupedia, or “the desired thing”, was more than a wish. During the war in Irpinia, the Romans were defeated. The Samnites, however, did not kill them, but made them prisoners so that they could testify to the strength of these populations in Rome. However, the Roman prisoners had decided to let themselves die of hunger. Then the Samnites resorted to an irresistible delicacy that kept them alive: the nougat.

Recently, in Italy and in Spain, we found the first documentable traces of this specialty since the fifteenth century, especially in Alicante. The current term, torrone, derives from the Latin torrere, meaning to toast, and refers to almonds.

The nougat of Cremona

There are those who say that the nougat was born October 25, 1441. On this date, in Cremona, Francesco Sforza and Bianca Maria Visconti married. To celebrate the wedding with great pomp, the court confectioners created the famous dessert in the shape of Torrazo; the tallest bell tower in the city presented with great pomp. The nougat was presented in the form of a parallelepiped, the same one that will be maintained in the following centuries, thus reaching us. That noble marriage, remained in history and with him, this delicious sweet. Probably, one of the reasons why the sweet of Cremona has been so successful, is the ease with which it is preserved. Once there were no iceboxes, refrigerators or preserving agents which is why, so many foods could easily go bad. A dessert made of dried hazelnuts, which we would say today, with a very long shelf life, was very well preserved.

Honey and flour are found in every season and they too were well preserved. The classic nougat always remains the same; traditionally white as centuries ago, however, today there are many varieties of this delight. In the confectionery industry, there are soft and hard nougats. The greater consistency of the nougat depends mainly on the cooking methods which in some cases can even reach 12 hours. There are also almond and hazelnut ones. Then the covering that can be of white, dark or milk chocolate and many other types. Not to be missed for the purists and I would say for the greedy, the nougat festival that takes place every year in November in Cremona.