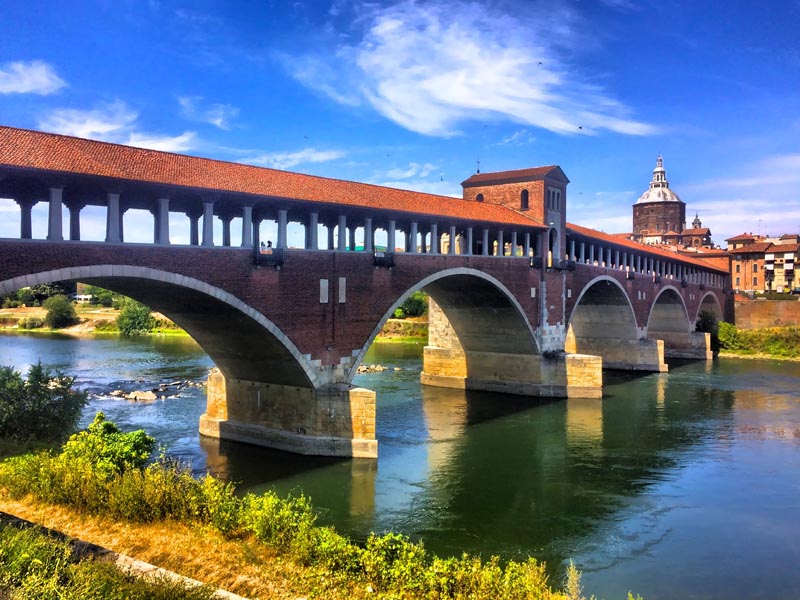 Pavia: the town suspended between history and innovation

No city should be so big that a man cannot walk out of it one morning. According to Cyril Connoly this should be the appropriate size of a city agglomeration and the city of Pavia perfectly corresponds to this description. Compact, discreet, and serene. Pavia is a city with hidden streets, silent pebbles and spacious squares. The way to know it is to get lost, well aware that any corner will make you feel at home.

The story of a proud city

Pavia, perched in the Lombardy region just a few kilometers from Milan, rediscovers its origins thanks to the Trans-Alban Gauls but knew its glory thanks to the Romans. In 572 its beauty and its strategic position earned it the title of capital in the Lombard kingdom even though, afterwards, Charlemagne conquered it.

In Pavia the coronation of Federico Barbarossa with the Iron Crown took place and he chose the Basilica of Pavia as a place of celebration of his excellence. Like many other Italian cities, for about a century, between 700 and 800 it was disputed between the French, Austrians and Spaniards, passing from kingdom to kingdom. It was only in 1859 that he became part of the Kingdom of Sardinia, thus beginning to travel the road towards the Unity of Italy. Undoubtedly, its history oozes from the walls of the University, being one of the oldest and where even Ugo Foscolo and Alessandro Volta have drawn wisdom.

Pavia: the city of churches

Although many men – including Einstein – crossed it, the city of Pavia gathers numerous churches.

The Cathedral, built in the fifteenth century, preserves the relics of the Holy Thorns of Christ, the suggestive paintings by Carlo Sacchi and the relics of San Siro, the protector of the city. The remains of Severino Boezio, however, are jealously guarded by the Church of San Pietro in Ciel d’Oro, as well as those of Sant ‘Agostino. Of incredible beauty and religious reverence, the monumental ark of Sant ‘Agostino undoubtedly stands out in its interior. The church of San Michele Maggiore, on the other hand, has its origins dating back to 1118 and still preserves its beauty and the grandeur of time.

The Visconteo Castle: power in the green

Not far from the center, Castello Visconteo rises up inside a lush garden. Built in 1360 by Galeazzo II Visconti, it reflects the culture that flows in the veins of the city of Pavia.

The court that resided there, in fact, was sophisticated and in search of passions and interests, which irremediably resulted in new knowledge. Incredible and charismatic characters succeeded each other in the large adorned halls, in particular Ludovico Il Moro. It was in the ducal chapel that he got married to Beatrice d’Este, daughter of the Duke of Ferrara. To date, there are many museums that have taken shape inside the Castle, such as that of the Risorgimento or the Pinacoteca Malaspina.

The Covered Bridge: the architectural umbrella of Pavia

The city of Pavia is crossed by the Ticino, one of the largest tributaries of the Po and one of the largest rivers for water flow. To offer a passage between the two banks of the river is the Covered Bridge that represents a symbol of Pavia.

Indeed, it connects the historic center of Pavia to Borgo Ticino and offers shelter from the rain. The version seen today was built between the late 40’s and the 50’s, in fact, the medieval bridge was destroyed during the Second World War, due to the Allied bombing. Its construction, according to legends, refers to the dispute between the Devil and the Archangel Gabriel, concluding with the latter’s victory. Pavia thus preserves the charm of a city on a human scale, full of history, religion and innovation.