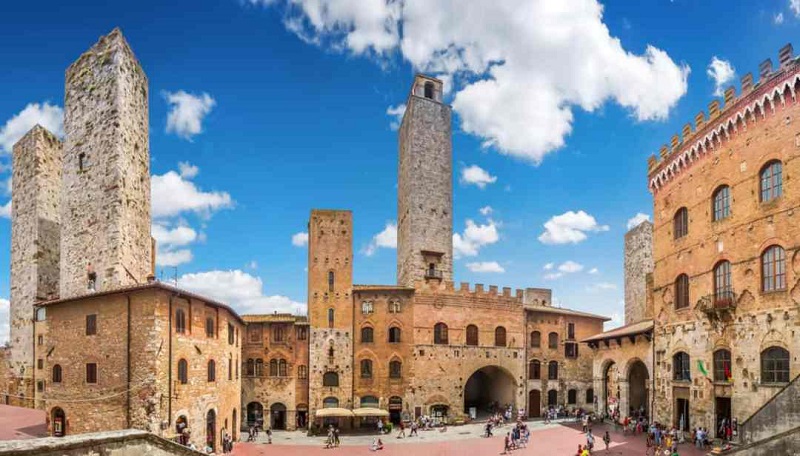 San Gimignano, the Manhattan of the Middle Ages

The hill on which the city of San Gimignano now stands has been inhabited since the time of the Etruscans. As extraordinary example of city organization, the village was included in the UNESCO World Heritage Site in 1990. Equipped with 72 towers or turreted houses in the medieval period (now only fourteen remain), it was nicknamed the Manhattan of the Middle Ages. The village is also famous for the production of Vernaccia, the first Italian wine to receive the label of Denomination of Controlled Origin in 1966, of saffron, and oil.

The golden age of the village and the Duomo

According to legend, the name of San Gimignano was given to the town when the homonymous bishop appeared on the walls of the city and scared off the hordes of barbarians. The village today looks like a small town with just seven thousand people, but that keeps the fourteenth-century atmosphere intact, as if time had stopped.
The turning point in the city’s history came when the local authorities decided to issue a very peculiar law. This, in fact, prevented the demolition of the old houses, if it were not for building more rich and beautiful ones.

Thus began the period of great splendor of the city, in which its most famous buildings were born. One of the beauties to be admired, although earlier than the law, is certainly the Duomo, which dates back to the 12th century. Divided into three naves, it contains the masterpieces of art geniuses such as Benozzo Gozzoli, Simone Martini and Bartolo di Fredi. The 13th-century wooden crucifix, in excellent condition, is also admirable. Moreover, in the church there is the extraordinary Chapel of Santa Fina. The frescoes inside realized by Ghirlandaio tell the life of the saint who, after her mother’s death, decided to spend the rest of her life lying on a wooden table.

The extraordinary urban organization of San Gimignano, as mentioned, is one of the characteristic features of the village, whose symbol is certainly the square where the aforementioned Cathedral stands. Here there are also the Palazzo del Popolo, the Palazzo Comunale and the Loggia del Comune, as well as the Civic Museum. In the latter building nothing less than Dante stayed, when he sided with the Guelphs. In the room dedicated to him there is also the most important work of the museum, the Majesty of Lippo Memmi.

San Gimignano, as mentioned, was very famous for its 72 towers, of which only 14 have remained intact. The oldest is the Rognosa Tower, built at the beginning of the 13th century, while the highest is the Grossa Tower (or Mayor’s Tower) 54 meters high. The Devil’s Tower is also very famous, so called because, according to legend, the ancient owner when returning from a trip found that it was higher than when he left. It is located in the famous Piazza della Cisterna, so called because of an octagonal well in the center. It was built by order of the Podestà Guccio dei Malavolti and contains in its perimeter other important buildings such as the Pucci tower, the Ridolfi palace, and the Ardinghelli palace with its two towers.

The village in a famous video game

San Gimignano also owes its fame to a very fascinating but definitely more macabre place: the Torture Museum. Here, in fact, there is a vast collection of torture instruments designed to cause physical and psychological violence in the condemned. Most of them date back even to the sixteenth century, and were used especially during the Holy Inquisition to torture or kill heretics.

Due to its unmistakably medieval atmosphere, San Gimignano was also chosen as the location for the famous video game Assassin’s Creed II. The protagonist Ezio Auditore, in fact, will find himself in a tomb that in the game is found in the Grossa Tower to kill the members of the Congiura. The protagonist assassinates first the friar Antonio Maffei on one of the highest towers of the village. And then the friar Stefano da Bagnone in a villa outside the walls belonged to the archbishop of Pisa Francesco Salviati. Finally, in one of the final parts of the game, Ezio finds himself following Jacopo de ‘Pazzi at the church of Santa Maria dell’Assunta, then killing him at the ancient Roman theater, outside the city walls.