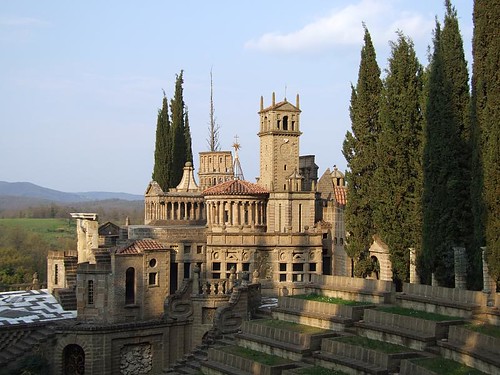 DID YOU KNOW?, TECHNOLOGY

In Umbria near Motegabbione in the province of Terni, stands the Scarzuola. A surreal and magical complex, built by the architect Tomaso Buzzi who, here has created his “ideal city“, made up of articulated and spectacular environments. And that stage all the inspiration and imagination of the designer.

Scarzuola from a Franciscan place to a magical place

It’s said that in the place where the Scarzuola stands, St. Francis of Assisi lived. Over time, a hermitage was built, then a church with a convent to witness this mystical passage. In the 1950s, a whimsical and ingenious architect, defined by Federico Zeri as “the most cultured of architects in Italy” of the twentieth century, bought the land and, in the thirty years that followed, he designed and built a surreal and fascinating complex. It is his place of refuge, the concretization of his thought and his inventiveness.

He designed the Scarzuola looking at the great architecture of the past: Villa d’Este and Villa Adriana above all. But it was also inspired by the magnificence of the Acropolis of Athens and the fantastic gardens of Bomarzo. The result is a scenographic complex, which has nothing to envy to the sixteenth-century architecture, or even to the amazement of the Baroque and which winks at the surreal designs of Maurits Cornelius Escher.

The architectural project, in fact, is a set of stages, theaters, labyrinths, spirals, walkways. Buzzi realizing the Scarzuola has made every architect’s dream come true: to design his own vision of architecture, the personal idea of an “ideal city”. An element that many theorized in the 16th century, but that the reality of the territories, the morphological characteristics and the interests of the Lords did not allow us to materialize. Buzzi, on the other hand, gave voice to an important concept: what others think is impossible, the architect can do it.

Scarzuola is a game, an urban theater that condenses into a building complex. It is Utopia as in the intentions of Tommaso Moro, it is the dream and the will to recreate an ideal world and in which urban planning and architecture coexist perfectly in a single element. Intentionally not completed, it is composed of seven bodies, which contain as many symbolic and theatrical scenes. All made with a very personal neo-mannerist style, enriched with stuccos, reliefs, frames, staggered floors, statues.

Scarzuola a visit not to be missed

It is a real architectural jewel, the metaphor of a journey within oneself, to discover the mystical and esoteric aspects. Buzzi said that Scarzuola “is like a medicine: it can have serious side effects.” And again “… at Scarzuola, when someone observes me that the new part, created by me, is not” Franciscan “, I answer: of course, because it represents the world in general and my world in particular – the one in which I had the good fortune to live and work – of art, culture, worldliness, elegance, pleasures (including vices, wealth) , and of the Powers etc.) in which, however, I made room for the oases of recollection, study, work, music and silence … “.

A place that still lives on thanks to the dedication of his grandson Marco Scolari. An attentive caretaker who shares the vision of his uncle and who leads the visitor to discover the different souls of the house on a journey. The complex can be visited by reservation, by writing to the e-mail address [email protected]