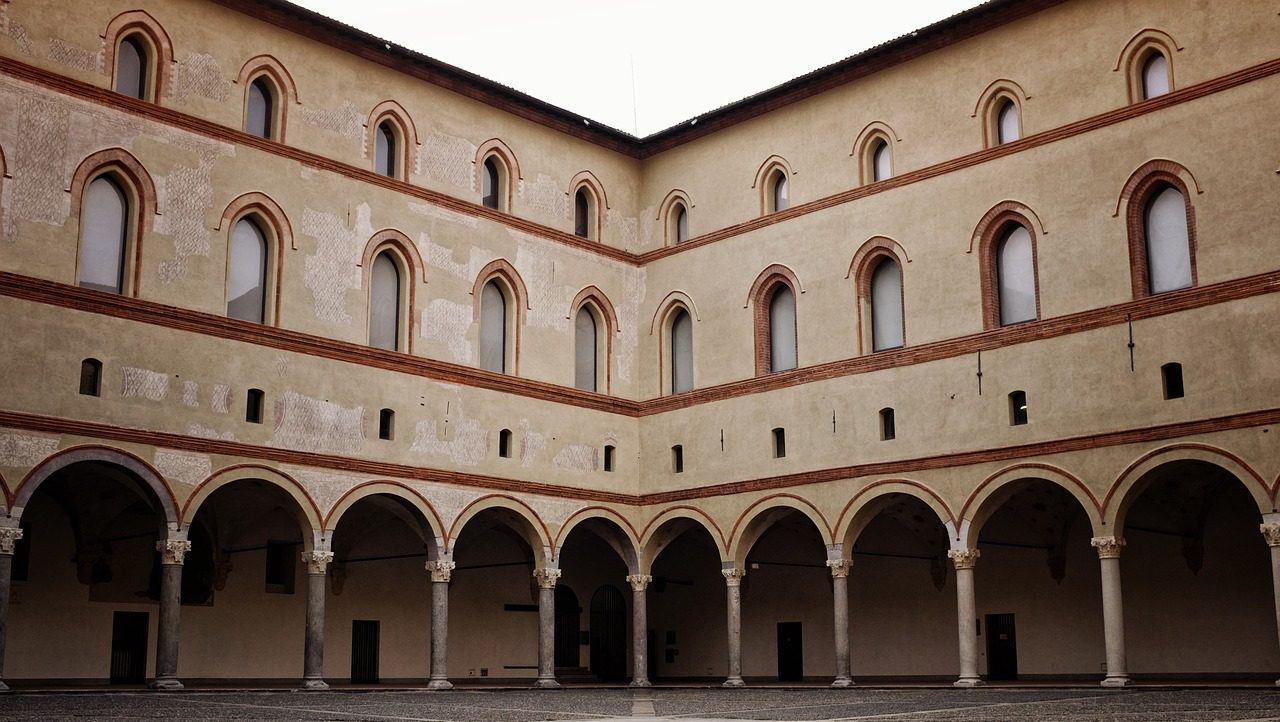 Sforza Castle in Milan, more than 700 years of history

Sforza Castle and its history

It is a medieval fortification rooted in the late Middle Ages. This giant stands on the “ashes” of Porta Giovia castle which in the fourteenth century was first military headquarters, then noble house.

The “construction” of the Castle was commissioned by the Soldier of Fortune Francesco Sforza, who made it his home. Works began in 1450. We can define it a rebirth, rather than a reconstruction, but an immense castle emerged. It still boasts record-breaking dimensions, in fact it is among the largest medieval castles in Europe.

Interior of the castle

Inside the walls and rooms of the fortress, history and art peep out. The dimensions of the castle, somehow extreme, have given way to architects, artists and prominent personalities of the various eras, to leave a piece of their art without ever distorting its essence. As with almost all castles with such ancient origins, there have been numerous owners and personalities who lived there. From noble figures to illustrious “men of war”, including Napoleon Bonaparte, until its definitive restructuring at the end of the nineteenth century by the hand of the political historian and architect Luca Beltrami.

The history of this castle is very complex and articulated, made up of continuous attacks, demolitions and reconstructions. Fortunately for us and the generations to follow, the castle became home to enormous cultural heritage, of unparalleled historical and artistic value. In fact, inside the fortress there are numerous museums, libraries, archives and exhibitions. You will find this immense custodian of wisdom just a few minutes drive from the historic center of Milan. It is easily accessible by subway. Better to book tickets for the visit, directly from the site. It is precisely for its size, or even for its history, that the fortification now houses an impressive number of exhibitions, museums, collections, archives and libraries. Below is just a taste of what you can visit.

Pietà Rondanini-Michelangelo Museum which takes its name from the great Tuscan sculptor who gave birth to works such as La Pietà, in the years of the construction of the castle.

Ancient Art Museum, which houses works from the fifth century to the Renaissance. The Museum of Wooden Sculptures, the Museum of Decorative Arts, the Egyptian Archaeological Museum, Sala delle Asse – Leonardo Da Vinci, the art gallery, the art library, the archaeological and numismatic library and numerous other collections, rooms full of art and history.

Milan is the world capital of fashion, home to the “stock exchange” and the Italian capital of nightlife. Also famous for its Cathedral, it has very ancient origins, and a fundamental role for the economy of the whole nation. If you have never been to Milan you must necessarily visit it.