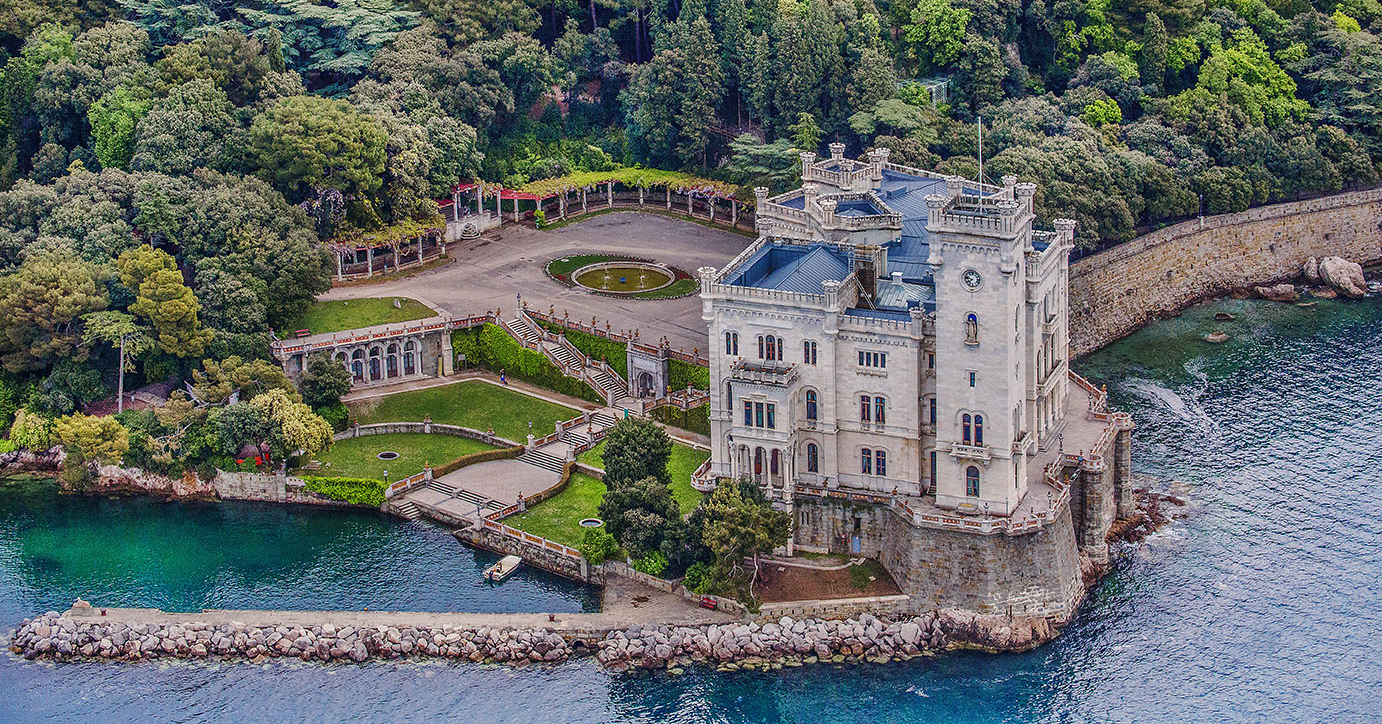 The imposing Miramare Castle, as beautiful as it is cursed

Object of fairy tales and myths of a distant past, the castles are the main element of any story that respects itself. Majestic, powerful, and with an ancient appearance, they succeed in captivating any visitor even after centuries. They take us back in time, thanks to their mysterious and evocative image. They possess an almost magical aura, and sometimes even a sinister one. Today we talk about the evocative story of Miramare Castle, in Trieste, whose stories still seem inexplicable!

The wonderful Miramare Castle was built at the behest of Maximilian of Habsburg-Lorraine, archduke of Austria. He wanted a home to share with his wife Carlotta, which was similar to the Spanish castles facing the Atlantic (hence the name Miramare, ie mirar el mar, look at the sea).

The history of Miramare Castle has its roots in ancient times, precisely in 1855, when Massimiliano realized he wanted to build a castle near the bay of Grignano.

The following year work began, and the project was entrusted to the architect Carl Junker. From the beginning Massimiliano was not enthusiastic, so much so that he even requested the sketch of another architect, Giovanni Berlam. This work appeared better in the eyes of the Archduke, although the definitive project remained that of Junker. The style of the castle is strictly neo-medieval, and initially it had to contemplate three floors and a mezzanine. This did not find the support of Massimiliano, who preferred to eliminate one of the planned plans. When in 1859 the archduke lost his position as governor of the Lombard-Veneto Kingdom, he moved with his beloved wife to the castle. Some time later he left for Brazil, and took the opportunity to catalog the beautiful plants that embellished the castle garden.

He returned to his affectionate home, but in 1864 he again decided to leave, this time with Carlotta, to reach Mexico. The years that the two lived in the Miramare Castle were happy, until Massimiliano died in Querétaro.
This tragic outcome was not the only one for the noble family. Shortly after the death of the dear consort, Carlotta lost her mind, giving clear signs of mental instability. He had himself locked up in the castle for some time before returning to Belgium. Meanwhile, part of the imposing building was completed.

Stories of ghosts and curses

Carlotta’s anger at the loss of her beloved husband was so blind that the woman cursed the castle and anyone who had stayed there. Ironically, there were several victims who found a fatal death in this beautiful but ruthless place. After Massimiliano, also the archduke Franz Ferdinand of Austria was brutally killed in the famous attack in Sarajevo, responsible for the outbreak of the First World War. Then it fell to Amedeo Duca d’Aosta, who perished during the Second World War, forced into a prison camp. Same fate for General Charles Moor, a decorated American who died in the Korean War.

In all this wake of desperation, a story is placed that paradoxically makes us smile. The New Zealand colonel Bowman, superstitious beyond imagination, believed in the bloody legend, and preferred to sleep in a tent in the castle park. Thus he saved his life, despite the curse. Another legend that would hang around the gloomy but at the same time fairy-tale manor, would like that the ghosts of Carlotta and Massimiliano still haunt its walls. In reality, the latter would be inclined to goodness and calmness, so much so as to be interested only in enjoying the peace of his home. In spite of any belief, the Castle of Miramare is constantly visited by Trieste and others, and its solemn charm has remained unchanged over the centuries. You too can visit the Miramare Castle, and tell us if you too have happened to stumble on some specter!