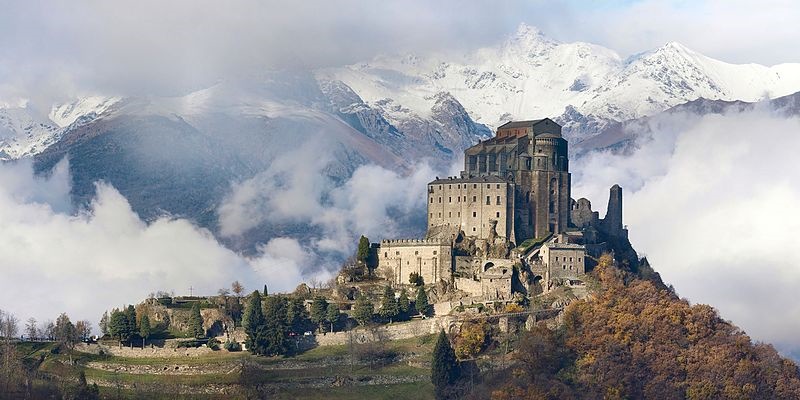 The Sacra of San Michele stands out instilling respect and reverence, in its towering position. It is one of the most impressive religious buildings in the Alpine area. The complex is located on the summit of Mount Pirchiriano, and dominates the Val di Susa from above, the only one between France and Italy.

The Sacra of San Michele was probably erected between 996 and 1003. It includes the Abbey, the New Monastery, the New Church and the Bell’Alda tower. At the end of the XI century the Foresteria was added, to give shelter to the pilgrims who climbed the summit. Which, however, was completely rebuilt between the end of the nineteenth century and the twentieth century on the north side of the structure.

The structure was dedicated to the daily life of the monks, and inside there was a library, some cells, a kitchen, and a refectory. The workshops for craft works were obviously there, but today, we can only see the ruins of the Monastery, purely medieval.

Bell’Alda tower is enchanting, standing out in the most isolated point of the New Monastery. The name of the tower is linked to the popular legend of the Bella Alda. According to popular belief, Alda was a beautiful girl who fled from the tower to escape the pursuing soldiers; however it remained unharmed. Later Alda, vain and foolish, for money, threw herself again from the same point, finding death on the rocks on which the Sacra is perched. Between myth and history, the New Church was built between 1148 and 1170; an imposing sanctuary in Gothic-Romanesque style, which still welcomes pilgrims today.

The magic line of San Michele

The Sacra of San Michele has always been wrapped in a veiling enveloping mystery, and spell, linked to the magic line of San Michele. It is a notorious energetic line that unites three abbeys dedicated to the Archangel Michael, among which, besides ours we have the Mont Saint Michel, in the Normandy region, in France, and Monte Sant’Angelo, in Puglia.

According to scholars of white magic, the energy point would be located on a pavement tile in the Sacra of San Michele. This small tile identifiable to the left of the Church, immediately after the entrance; at the specified point one would perceive the very strong energy of the San Michele line. The Sacra of San Michele can be reached on foot via the path to the town of Chiusa di San Michele, or with a mule track from Sant ‘Ambrogio. Sentiero dei Principi from Borgata Mortera is easier and is very suggestive.

The Sacra og San Michele on the Via Francigena

Moreover, from the Sacra begins the path of the Franks, a well-known hiking trail that connects the Abbey with the upper valley. The historic Via Francigena, which connects Mont Saint Michel in France, to the Foggia Sanctuary of San Michele Arcangelo also passed through the Sacra. It is also possible to visit the Sacra from October 16 to March 15 from Tuesday to Saturday, from 9:30 to 12:30 am and from 2:30 to 5 pm.

Guided tours of the Sacra of San Michele

The entrance to the Sacra di San Michele is free for children under 6, and every Sunday afternoon and on the afternoon of the holidays, there are guided tours of the Sacra of San Michele, with the cost included in the admission ticket.

It is also possible to find detailed information on the website of the Sacra di San Michele www.sacradisanmichele.com. Those who do not renounce to climb, can reach the area with alpine ascents. The complex can also be reached via the Carlo Giorda via ferrata, which starts from Sant’Ambrogio di Torino at the foot of Mount Pirchiriano.