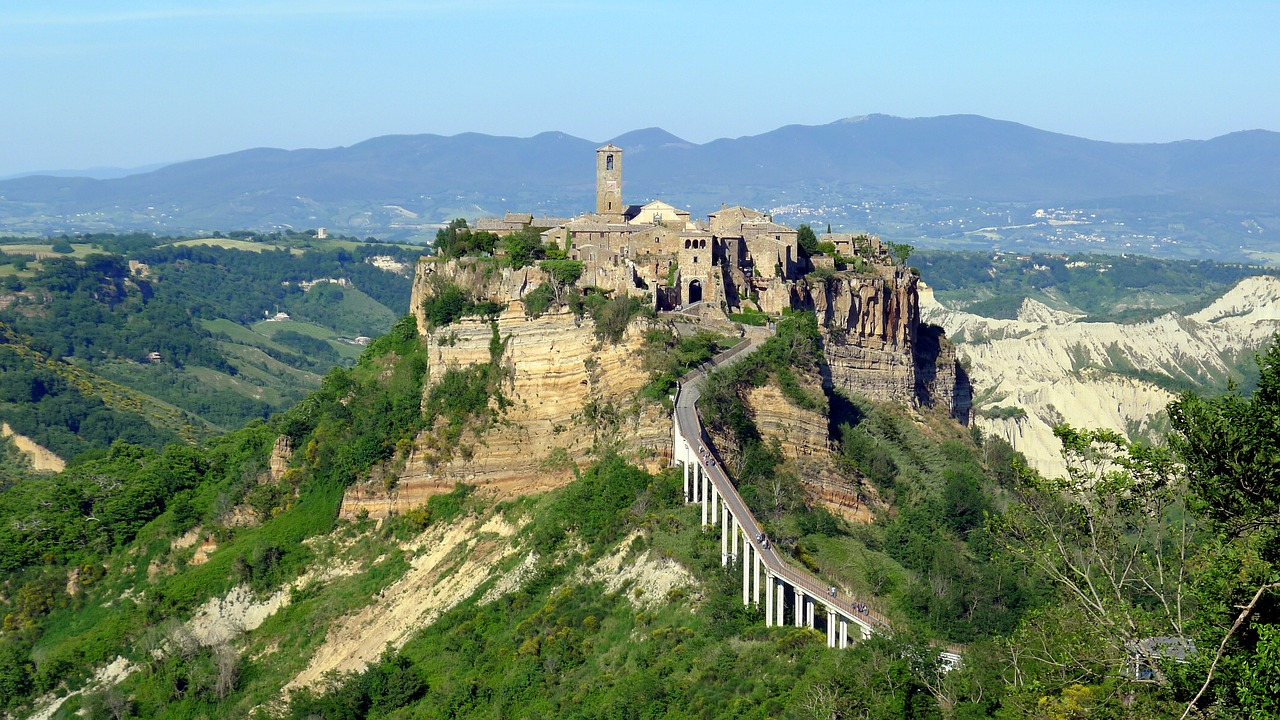 A “charming lady” capable of moving thousands of tourists rises in the heart of Etruscan culture. Eternally young if we think that his appearance has remained the same for centuries. Old if we look at it with the eyes of modernity. It is Civita di Bagnoregio, in the province of Viterbo. A surreal village capable of guiding us on a fascinating journey through history and nature.

Daughter of the Valle dei Calanchi, of an environment so special as to lead us to believe that it is an extraterrestrial reality. Civita di Bagnoregio appears as resting on a hill at a height of 443 meters. An unstable relief, almost friable, continuously subject to landslides. This is why to reach the ancient village it is necessary to cross a bridge that bravely crosses the chasm below. A pedestrian connection suitable for those who do not suffer from vertigo and that today is the only way to reach the place.

All around a panorama worthy of the best fantasy films is opened. A rocky landscape dominated by shades of brown. They are the nuances of a barren land that, here and there, gives way to green tufts. Shrubs and bushes that try to animate a place that has been sleeping for centuries, preserving, as in a dream, its immortal beauty. And if this style certainly fascinates us then perhaps it will surprise us to know the nickname given to such a seductive place. “The dying village”. A pseudonym not among the most kind nor the most captivating. And yet here, every year, crowds of curious visitors arrive.

Custodian of the Etruscan civilization

Daughter of a mysterious people who conquered different territories of our central Italy. They were the Etruscans. Here they left the oldest traces of the history of Civita di Bagnoregio. Examples are the numerous tombs that go to make up real necropolis. Like the grotto of Bonaventura, where it is said that San Francesco would have restored Giovanni Fidanza then become San Bonaventura.

What is told in the shape of a cave was actually a chamber tomb datable to the Etruscan period. The village then became Roman. These ancient peoples worked to limit the problems of instability that had already manifested themselves. A seismic zone, subject to landslides and erosions. This is why the Etruscans first and the Romans later engaged in engineering works: canals and embankments. The fall of the Roman Empire led initially to the loss of knowledge of the “greats of the past” and so this place ended up abandoned to itself. Then the Middle Ages and the new development. Today, what remains are the productions of this last period. The gothic houses, the church of San Donato, the remains of the birthplace of Bonaventura.

But also the door of Santa Maria, one of the passages of the ancient walls. Topped by two lions that force a human head under the paw. A symbol of strength aimed at denying submission to the Monaldeschi family. The memory of a battle of the people represented on the old gateway to the village. There are also traces of a “nearer” age. The Renaissance, identifiable in the sixteenth-century mill. Today it is possible to breathe an air that smacks of old. The weight of past history carried dignifiedly on the shoulders of this old village. An almost uninhabited place but that preserves the right qualities that make it love. It will not be a coincidence that in 2017 there were 850 thousand visitors who felt the call of the fascinating village that dies.