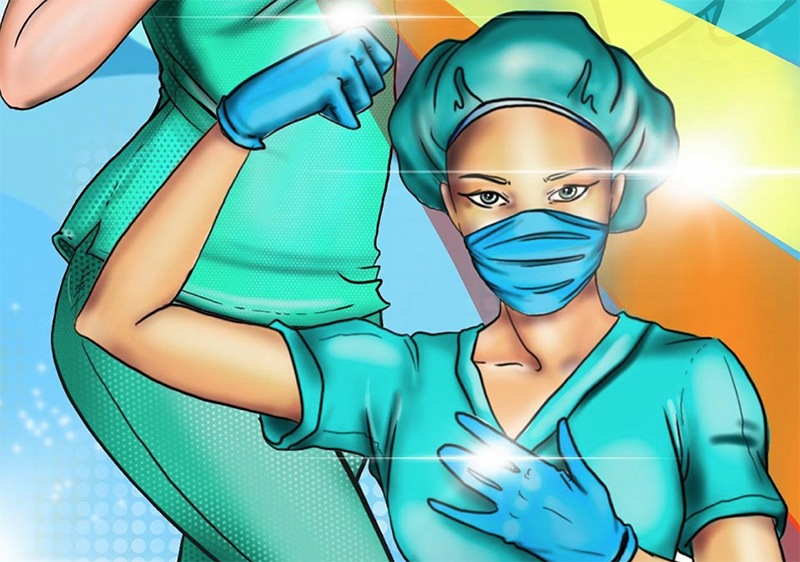 Claudia La Bianca, the Italian artist of the covid heroes

These days, on the facade of one of the largest hospitals in the world, the Jackson Memorial Hospital in Miami, Florida, a colorful mural of over thirty square meters has appeared, to pay homage to doctors and nurses engaged in the battle against Covid19. The artist is an Italian and her name is Claudia La Bianca, who flew to the United States after a degree in fashion design. At first New York and then Miami, always looking for interesting ideas for her Street Art.

Claudia, from Sicily to USA

The mural is titled “Our Heroes” and celebrates the great work that all healthcare workers are carrying out in this pandemic: doctors, nurses, social workers, cleaners and security workers …

People who in recent months have worked with dedication, sacrifice, without schedules, risking their lives to save others from the epidemic. “We will never stop thanking them enough,” the artist told CBS. To create the mural, Claudia worked ten hours a day for almost two weeks. The work was sponsored by former football player Lucas George Petitgout, who donated $ 30,000 to her to do a job of that magnitude.

At the beginning of this pandemic, she was very worried about her country, Italy, and her family. The spread of the virus then spread to the United States. Contagion containment measures have also been taken overseas. Claudia found herself locked in her South Florida home.

However, this period of isolation was productive. She drew a lot. In her mind, the project began to take shape with the main protagonists of this pandemic, those who remained in the front row, with coats and masks, fighting against the Covid-19. Claudia started drawing nurses with the appearance of comic book superheroes. The design made the rounds of social networks and immediately liked it a lot. She arrived in hospitals with donations of meals. It was then that the Jackson Memorial made two walls available and Claudia worked ceaselessly for 14 days to create the magnificent murals.

She was born in a small village in Sicily in the province of Palermo, Bagheria. Daughter of artists, it has always been easy for her to express her creativity. The mother says she was born with a pencil in her hand. She lost her father early. In her teens she fought against the extra pounds and was targeted by the country’s bullies.

That’s why she spent so much time at home, drawing fantastic women, superheroines, and dreaming of one day becoming like them. “I think I did it,” says Claudia today. The mural created for the JMH has strong and bright colors and with a predominance of female figures reminiscent of Claudia’s previous works, engaged for some time with the Women Empowerment movement, “power of women”. She is however an all-round artist. He worked as a director for the television program “Hanna Help Me“. Claudia has made commercials for big names like Walmart and many music videos for international bands. He has also produced a short film entitled “The Journey of a Dragonfly”.

Since moving to Miami in 2006, she has made a name for herself for her Street Art. The murals of the Wynwood art district bear her signature. In 2017, the Miami New Times listed her as one of the “most interesting people of the year”. From there it was a succession of interviews for CNN, Telemundo … She captured a page in the New York Times. Now she hopes to be able to create other murals such as that of the Miami hospital. But if you ask her which is the most precious work of art: “my two beautiful children, Kalypso and Namu“, she will respond.