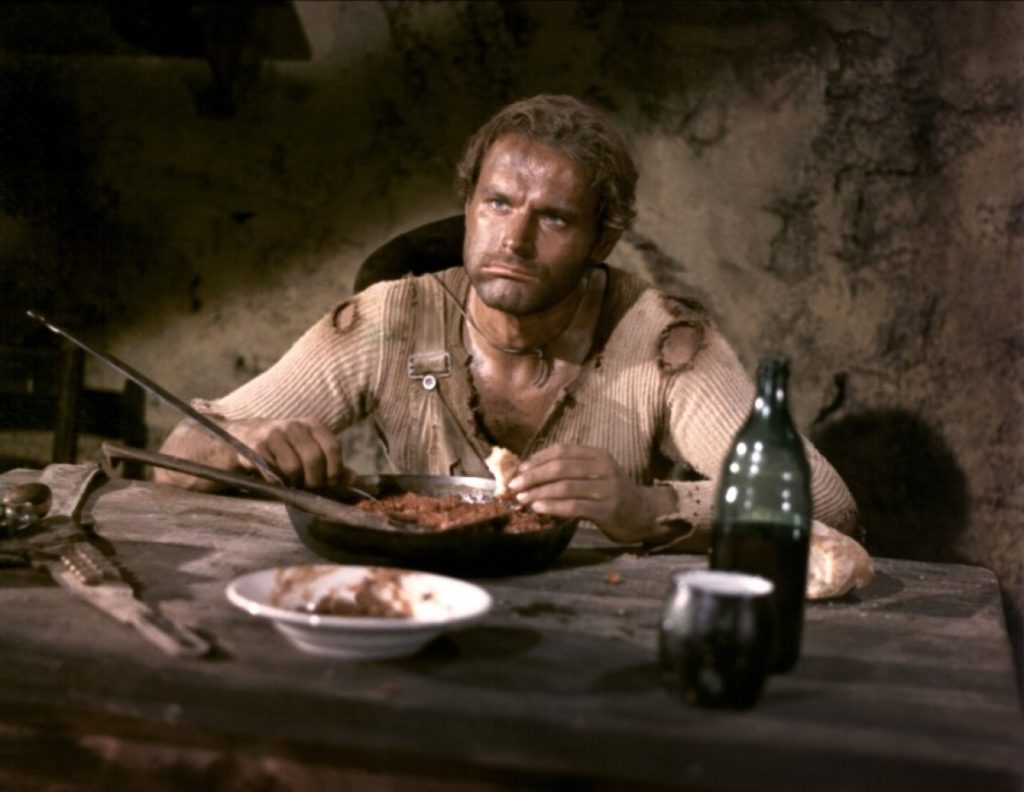 What happens when the art of cinema meets that of cooking? Certainly only good things. But when Italian cinema and cuisine are crossed, the result can only be one: pure spectacle. In fact, the most famous actors and directors of Italic origin have always used homegrown dishes and delicacies to make their film epic. But what are the symbolic scenes of our cinema? Here are the ones that we think have entered the history of the seventh art!

Italian cinema and cuisine: Fantozzi on a diet!

Are you ready? Let’s start with the most famous accountant in Italy: the tragicomic Fantozzi! The character created by Paolo Villaggio has entertained entire generations with his gags and bizarre adventures. His profound irony exposed some aspects and stereotypes of Italian society at the turn of the seventies and eighties, becoming a contemporary icon. Diet was one of the funniest Fantozzi’s obsessions. Since the first film the accountant had tried in vain to lose weight, being locked up in the notorious Magnolias clinic. In Fantozzi contro tutti he tries again, this time with the help of the German dietician Professor Birkermaier. During one of the many tortures, however, the good Fantozzi yields and slings like a hawk on that plate of meatballs. All under the eyes of Birkermaier, in one of the funniest scenes in the series.

Miseria e nobiltà: happiness is a plate of spaghetti!

With a jump back in time we go to 1954, the year that saw the release of one of the many Totò masterpiece: Miseria and nobiltà. The film is set in Naples in the late nineteenth century. It tells the story of the poor lives of Felice Sciosciammocca, penniless with a past as a womanizer, his family and his friend Pasquale, a not so good itinerant photographer. The turning point came thanks to the marquis Eugenio Favetti who, in exchange for a personal favor, suddenly solved all the economic problems of the protagonists. One day, surprisingly, the Sciosciammocca receive a lunch at home. Under their incredulous eyes, a table is set with delicacies from everywhere. As soon as the waiters came out of the room, the whole family approached those steaming dishes, and then launched themselves against a carafe full of delicious spaghetti with sauce. Obviously with bare hands!

And now it’s the turn of spaghetti westerns. No, this is not a typical dish of Italian cuisine, but a real cinematographic genre. In fact, between the sixties and seventies, many Italian directors began to delight in westerns, often with excellent results. And among the most successful films, the one with Terence Hill and Bud Spencer stands out: Lo chiamavano Trinità. The iconic scene is certainly the one at the beginning, when a dusty Terence Hill enters a dirty inn. As soon as he sits down he orders a soup of beans, which he devours with a voracity never seen, directly from the pan. To make it even more realistic, the actor decided to fast two days before shooting. Here’s what it means to sacrifice for work …

Macaroni you provoked me, and I eat you!

Let’s go back to 1954 (not a bad year for Italian cinema). Un americano a Roma is release. A film that narrates the adventures of Ferdinando Moriconi, played by an amazing Alberto Sordi. Nando is a young Roman who grew up with the myth of American culture.

He was not able to crown his dream overseas, so he decides to transfer his fixation to the capital, Americanizing his life. The results are obviously tragicomic, especially in the culinary field. In one of the most famous scenes of Italian cinema and cuisine, the protagonist decides to dine with some typical American products. After some seconds the young man gives in to the charm of a plate of steaming spaghetti plate and a nice bottle of wine. To make it all epic, the famous phrase: macaroni, you provoked me and I destroy you now!

Cinema and Italian cuisine: tell us your opinion!

These in our opinion are the most famous scenes of Italian cinema. And you have others to report to us? Write it in the comments!