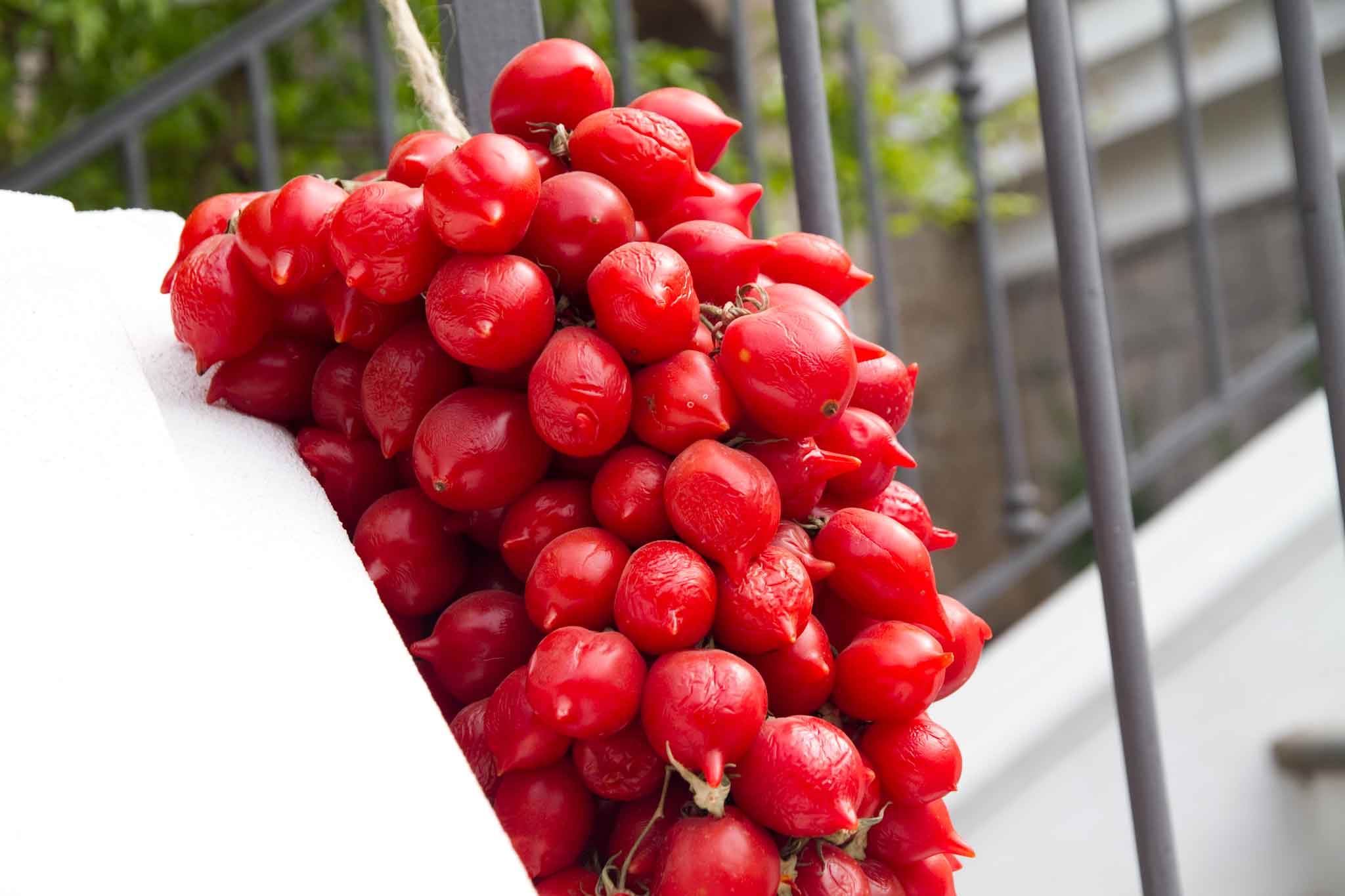 Pomennino del Piennolo, a singular downward tip and a hard, intense red skin. A lively, sweet taste with a sour aftertaste. Wonder and exaltation of the palate. A specialty that grows exclusively on the slopes of Vesuvius. The history, the curiosities and the legend of a product of the highest quality and expression of ancient culinary traditions.

The history of the Piennolo tomato is fascinating. The tomato arrived in the city of Naples thanks to the homage to the new king Ferdinand IV by the viceroy of Peru. The king, sharpening his wits, decided to cultivate it in the most fertile areas of the kingdom. The intense red color, the strong taste, the maximum concentration of acids, sugars and other soluble solids make it long-lasting. Furthermore, the organoleptic qualities do not undergo any variation. The characteristics of the tomato are linked to the climatic factors and the type of soil. The richness of organic acids, in fact, determines the “vivacity” or “acidity” of the taste. The Pomodorino is appreciated in its fresh state, in glass preserves and in the typical “al piennolo” shape (preserved in hanging).

The areas of production and conservation of the Piennolo tomato, in particular, are Somma Vesuviana, Terzigno, Torre Annunziata, Torre del Greco, Trecase, San Giorgio a Cremano, San Giuseppe Vesuviano, San Sebastiano al Vesuvio, Boscoreale, Boscotrecase, Cercola, Herculaneum, Massa Di Somma, Ottaviano, Pollena Trocchia, Portici, Sant’Anastasia and a portion of the territory of the municipality of Nola. The estimated cultivation area is about 480 hectares. Annual production is about 4 thousand tons of fresh product. In 2009 the Vesuvius tomato became a DOP, renewing and revitalizing the commercial interest and the entire production departments.

The little tomato has gained a place in the Neapolitan crib for almost two centuries. The most illustrious historical information is reported by Achille Bruni, in 1858, in his “Vegetables and their cultivation in the city of Naples“. The entomologist describes the cherry-shaped tomatoes and that “they remain excellent until spring, provided they are tied up and suspended from attics“. Another literary testimony is that of Luigi Palmieri in the Yearbook of the Royal Higher School of Agriculture in Portici of 1885. Palmieri writes of the practice of preserving the berries of the variety p’appennere in ventilated places and away from the sun.

Francesco De Rosa in “Italia Orticola” of 1902, shows the whole technique of cultivation of cherry tomatoes and that the “cerasella” of Vesuvius had been replaced by the type “a fiaschetto”, more suited to piennolo. As for the legends, instead, it is said that Lucifer created Naples stealing a piece of Paradise, but his touch made the land arid. Jesus began to cry and his tears, falling from the slopes of Vesuvius, made the soil fertile giving birth to the Piennolo tomatoes. Another legend linked to Vesuvian excellence tells of the women of Torre del Greco. The fishermen’s wives took care of the remains that were used for fishing and used the same technique to weave the knots of the tomato nets.