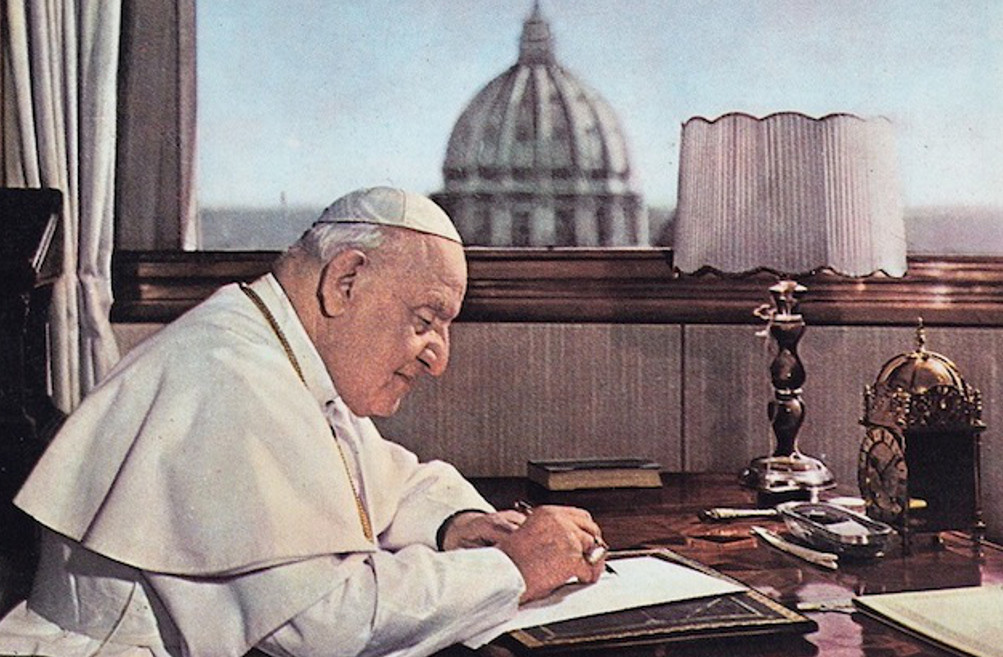 Angelo Roncalli, the Good Pope became a saint. On November 25th 1881 in Sotto il Monte, in the province of Bergamo, Angelo Giuseppe Roncalli was born. He was to become Pope with the name of John XXIII, knows as the “Good Pope“. Angelo Roncalli concludes his earthly life on June 3rd, 1963, while the whole Catholic world is gathered in prayer for his soul. In 2014 John XXIII knows the glory of the altars together with John Paul II, the canonization ceremony of the two holy popes, in Saint Peter’s Square, attracts thousands of faithful from all over the world.

Angelo Roncalli, from humble seminarian to patriarch of Venice

Angelo Roncalli is the fourth of thirteen brothers of a family of humble origins. He studied at the minor seminary in Bergamo thanks to his uncle’s economic support. Later he moved to the Apollinare Seminary in Rome where he completed his studies with full marks.

From a young age, he expressed his devotion to the Virgin Mary with numerous pilgrimages to the Sanctuary of the Madonna del Bosco in Imbersago. He received priestly ordination in 1904 in Piazza del Popolo in Rome. During the First World War Don Roncalli also played the role of military chaplain. On 12 January 1953 Nuncio Angelo Giuseppe Roncalli was appointed cardinal by Pius XII and three days later he was assigned the leadership of the patriarchate of Venice.

Angelo Roncalli comes to the Chair of Peter

The 1958 conclave convened after the death of Pope Pius XII, is held from 25 to 28 of October. After eleven ballots the white smoke arrives: Angelo Giuseppe Roncalli is elected pope by the cardinals gathered in the Sistine Chapel.

The patriarch of Venice, late in life, takes the name of John XXIII. Everyone thought that, given the age, he would have been a transitional pope, and therefore would not have felt any setbacks and jolts at the helm of the Church of Rome.

But every prediction will be denied by what will be an extraordinary papacy that will leave an indelible mark on the history of the Church and of the whole world. Angelo Roncalli, vicar of Christ on earth, remains on the chair of Peter for only five years. Only one shine, in which Pope John XXIII writes history together with the powerful of the earth.

The encyclical letter “Pacem in Terris“, published in April 1963, expresses all the modernity of thought of Pope Roncalli. “Peace on earth, the deep yearning of human beings of all times, can only be established and consolidated in full respect for the order established by God”.

This is the beginning of the papal encyclical which becomes a pacifist manifesto in the era of the so-called “cold war”. In fact it is a time when the world is divided between two blocks, the Soviet Union and the United States, ready to do battle. Pacem in Terris remains today a historical, theological and socio-cultural document, among the most important of the whole of the twentieth century.

The good Pope is also and above all the “Pope of the Council”. On October. 4th 1962, Pope Roncalli went to Loreto and Assisi to place the Second Vatican Council under the protection of the Virgin and St. Francis: ope the ‘revolution’ that marks the beginning of the modern era for the Catholic Church. Second Vatican Council begins on October, 11th 1962 in the presence of 2540 council fathers from all over the Catholic world. For the first time, non-Catholic Christian observers are also invited to the Council.

Pope John XXIII opens the conciliar works with the address Gaudet Mater Ecclesia. In his speech, the pontiff reaffirms the purpose of the Council, which is to propose the Christian doctrine and tradition in a form suited to the contemporary world.

The Holy Father emphasizes that the content of faith is and remains immutable but it must certainly change the way of exposing it and making it live for the people of God. Pope Roncalli dies only a few months after opening the conciliar works that are concluded by Paul VI on December 8, 1965. The transitional Pope turned out to be a great innovator, a man of history.

The speech of the moon by Pope John XXIII

One of the most famous speeches of St. John XXIII is undoubtedly the “speech of the moon”. On October, 11th 1962, on the occasion of the opening night of the Council, St. Peter’s Square is crowded with faithful. Pope Roncalli looks out to bless the crowd and then improvise, gives a speech that remains engraved in everyone’s hearts. “Dear children, I hear your voices. Mine is a single voice, but summarizes the voice of the whole world.

Here the whole world is represented. It would seem that even the moon rushed tonight – look at it – to look at this show. At home, you will find children. Give a caress to your children and say: this is the Pope’s caress. You will find some tears to dry, say a good word: the Pope is with us, especially in the hours of sadness and bitterness”.