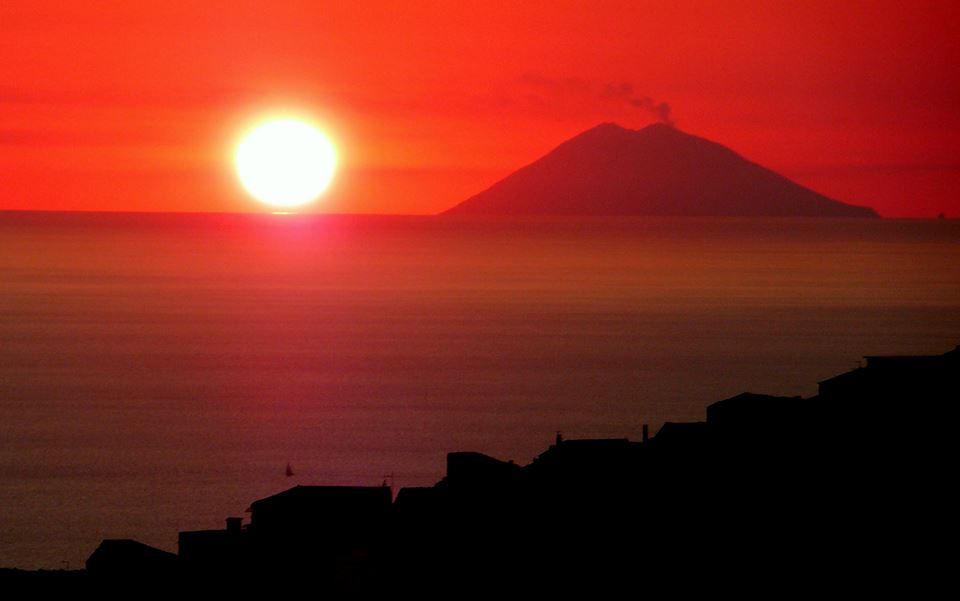 Stromboli playing with the sun in the Mediterranean waters

The sun setting over the Stromboli is a spectacle of extraordinary beauty that could become an UNESCO heritage. The candidacy is supported by Calabria Network Mediterranean, a partnership made up of young Calabrian professionals who intend to promote and enhance the beauty of places.

Stromboli, the sea and the sun: Mediterranean suggestions

When it is evening and the sky is clear, from the Calabrian coast you can admire the beautiful scenery of the solar disk that slowly disappears into the Stromboli crater. Volcanic island is part of the beautiful Aeolian archipelago, one of the most attractive destinations in the Mediterranean.

The sun that is “enveloped” by the volcano, which is particularly active in the latter period, is truly a breathtaking natural spectacle. The chromatic nuances of the sunset, the colors of the sea, the ‘thread of smoke’ that rises from the volcano. These are a unique ‘postcard’ in the world that, in many hope, becomes a heritage of humanity.

The idea of nominating the sunset over Stromboli as an UNESCO heritage site is by a group of young Calabrians who have created the Calabria Network. According to the members of the association, the evocative spectacle of the volcano that “hides the sun in its bowels” has all the requisites required for the candidacy.

Uniqueness, universality and irreplaceability, these ‘the characteristics of the union between His Majesty the sun and His Highness the volcano’. The requirements fall within the parameters indicated in the Unesco Convention on the Heritage of Humanity of 1972. The document concerns natural phenomena or atmospheres of significant natural beauty and objective aesthetic importance. Places and situations to be observed and therefore to be recognized as a world heritage. Naturalistic riches for whose protection the entire international community has a duty to cooperate. Other 17 institutional and social subjects joined the proposal.

Stromboli, one of the Aeolian islands

Aeolian or Lipari islands are a Sicilian archipelago perfectly visible from the Calabrian coast. Trinacria islands have already been UNESCO World Heritage since 2000 as a biosphere reserve. The archipelago consists of Lipari, Salina, Filicudi, Alicudi and Panarea; then there are Vulcano and Stromboli which still have active volcanoes.

Aeolian Islands are all of volcanic origin. The oldest ones are Alicudi and Filicudi, which are about a million years old. The youngest are Vulcano and Stromboli which date back to about one hundred thousand years ago. This archipelago represents the ancient Eolia, the legendary home of Aeolus the god of the winds; of Hephaestus the god of fire and of the mythical Cyclops of which Homer also speaks in the Odyssey.

Even the Riviera dei Tramonti association, founded in Lamezia Terme, promotes and supports the project idea. According to which in Calabria it is possible to admire scenarios that are among the most evocative of the Mediterranean. The association aims to enhance and raise awareness of the natural beauty and tourist potential of the Calabrian central Tyrrhenian coast. The Riviera of dei tramonti, is the sunset bay that goes from Nocera Terinese to Curinga. It also includes the coastal hinterland with the characteristic villages that from the hills degrade to the sea.

Riviera dei Tramonti is an organization that is gaining support not only among the population but also on a cultural and social level with the support of numerous institutions. The association aims at re-evaluating the immense rich landscapes of this particular Calabrian coastal stretch. The sun that gently ‘goes to sleep’ on the sea is certainly a unique and breathtaking image but it is also one of the key elements to make the splendor of Calabria shine in the middle of the Mediterranean, the cradle of ancient civilizations.