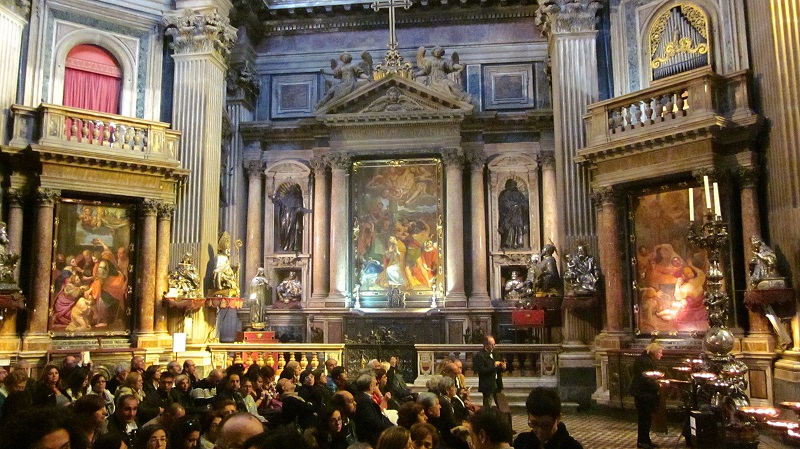 The Royal Chapel of the Treasure of San Gennaro

A chapel as a vow to the patron saint of Naples to free the city from the bad luck that went wild in the 16th century. The war, the plagues and the caprices of Vesuvius, in fact, were bringing the citizenship to its knees. So that they asked for help to its main point of reference, San Gennaro. Thus it was decided to create a new place dedicated to him inside the cathedral. It is only the beginning of the history of the Royal Chapel of the Treasure of San Gennaro.

Built to invoke the Saint’s help

When the Neapolitans decided to invoke the help of San Gennaro, Naples was really in critical condition. The attempt to reconquer the city by the Angevins had caused internal conflicts, that led to a lack of food supplies and, therefore, to a famine. Moreover, Vesuvius in turmoil often made the earth tremble under the feet of the citizens. Thus the Neapolitans, on the anniversary of the transfer of the remains of San Gennaro from Montevergine to Naples, took the decision to build a new chapel dedicated to him.

The representatives of the five seats of Naples, together with that of the people, decided to collect eleven thousand shields for the tabernacle and for the new chapel (in the end they obtained 480,000 of them). Twelve members of a new institution, the Deputation, that was to take care of the work, were also appointed. Thanks to the commendable work of this institution, the chapel never entered the ecclesiastical heritage, which did not pay a single shield for its construction. Even today, in fact, it remains the property of the Municipality of Naples.

The works for the construction of the Royal Chapel of the Treasure of San Gennaro were entrusted to Francesco Grimaldi, a highly regarded architect in Naples in the early seventeenth century. For the decoration of the Greek cross chapel, non-Neapolitan craftsmen were chosen and this aroused great discontent in the local artists, who began to sabotage the designated ones. The Cavalier d’Arpino was the first to give up, while Guido Reni escaped from Naples after his aide was stabbed. Francesco Gessi and Domenichino also left the building site. This latter returned to continue the work and suddenly died, perhaps poisoned. The chapel, however, managed to be completed in 1646 thanks to the work of the Emilian Giovanni Lanfranco, also threatened, and of the Neapolitans Luca Giordano, Massimo Stanzione and Giuseppe Ribera.

The baroque style of the chapel of San Gennaro

The chapel is presented in a magnificent Baroque style and is separated from the Duomo by the bronze gate of Cosimo Fanzago. This element has the particularity of issuing real musical notes if you beat with a coin. In the structure there are seven altars. The main one, made by Francesco Solimena in porphyry, it contains the ampullae with the blood of San Gennaro. Eighteen statues of saints surround the sculpture of the patron, placed on the main altar. In the entire chapel, considering also the sacristy and the chapel of the Conception, there are as many as 54 silver reliquary busts depicting the patrons of the city. Fresco cycle is, for the most part due to Domenichino’s hand. The central part of the dome is instead of Lanfranco, while the altarpiece of the San Gennaro that comes unscathed from the furnace is by Ribera.

The sacristy, the chapel of the Conciliation and the Treasury Museum

From the right altar a corridor leads to the sacristy of the Chapel of Treasure and to the chapel of the Conciliation. The first still has the ancient seventeenth-century furnishings and is rich in stuccoes of putti and religious figures. The most important element is the oval fresco bearing the San Gennaro in glory of Luca Giordano.

Moreover, on the tympanums of the wardrobes, there are four other paintings on copper, also by Luca Giordano. They represent a Madonna and Child, San Zaccaria, Sant’Anna and San Giuseppe. The chapel of the Conception, on the other hand, presents the Liberation of an obsessed by Massimo Stanzione on the altar. The vault is richly decorated with stuccos and marbles by Giordano and later by Giacomo Farelli. This chapel leads to the spaces of the Museum of the Treasure of San Gennaro. This area, inaugurated in 2003 as a museum, covers an area of over seven hundred square meters and offers a precious collection of jewels, statues, fine fabrics and paintings of inestimable value.