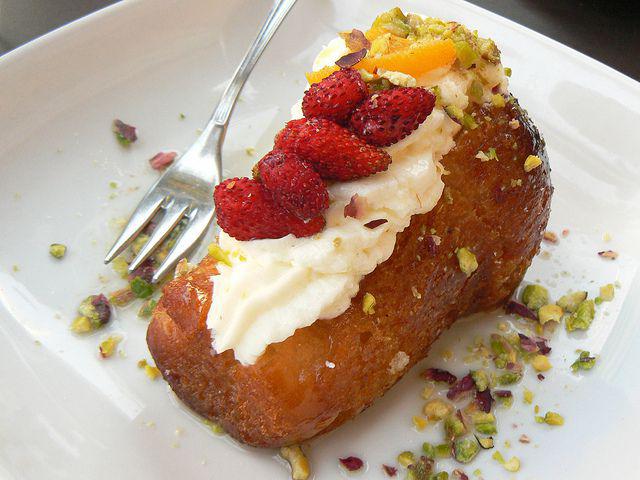 Baba: story of one of the symbols of Neapolitan cuisine

Soft, delicate, sugary and succulet: the baba, or Napolitan cake, has always been one of the most loved desserts by young and old, as well as one of the symbols of the vast Neapolitan gastronomic repertoire. In fact, biting that soft dough soaked in rum and poetry reminds us of the suggestive Neapolitan alleys, its breathtaking views and the warmth of its people. But this wonder, although firmly anchored in the Campania tradition, saw its birth far beyond our own borders. So let’s savor the long and intriguing story of the Neapolitan baba.

From France with love

The story of baba begins in Lunéville, a small town in the north-west of France, a few kilometers from the borders with Belgium and Germany. We are in the mid-eighteenth century, with the city that at the time hosted Stanislaus Leszczinski, the Polish king in exile. Cooking was one of Stanislaus’ greatest passion, and he never failed to develop new dishes and experiment with foreign specialties.

One day he decided to enjoy a slice of gugelhupf, an Austrian dessert with an unpronounceable name. Being toothless, however, the Polish king opted to soften it with Tokaji, a typical Hungarian wine. The result was a sweet and moist dessert, with a strong taste that immediately conquered its creator. Subsequently, the recipe was improved with the addition of raisins, candied fruit, saffron and three leavenings. The name of Alì Babà was chosen to honor the protagonist of One Thousand and One Nights, a collection of stories very dear to the Polish monarch.

Meanwhile Stanislaus’ daughter, Maria Leszczyńska, marries the French king Louis XV. And among the many things that she carries into the transalpine court, the recipe for that dessert created by his father and perfected by chef Nicolas Stohrer stands out. In Paris, royal pastry chefs replace Tokaji with Jamaican rum and eliminate candied fruit and saffron. In addition to the ingredients, the form of this delicacy is also modified, with that of the typical mushroom with stem and head. It’s a success! In the whole kingdom this sweet become famous on the tables and in the kitchens of French nobles. Numerous variants spread throughout the country, such as the donut-shaped without raisins, but with abundant apricot jam. Despite everything, however, of Naples and the Neapolitans there is still no trace.

Baba at the Bourbon court

After Louis XV, Louis XVI, the husband of Marie Antoinette, succeeded to the throne of France. She had a sister, Maria Carolina d’Asburgo, married in 1768 with Ferdinand I of Bourbon. Overly complicated plots? Perhaps, but this is needed to illustrate the process that has brought numerous dishes and delicacies to the Neapolitan capital. Maria Carolina, in fact, when she moved to Naples she carried with her her favorite recipes including kipferl (better known as cornetto), coffee, potato gateau and that dessert known as Alì babà.

All these dishes of Central European origin spread in the Kingdom of Naples, taking root in the local culinary culture. Neapolitan cooks and pastry chefs modified the original recipes, adapting them to the typical products and tastes of southern Italy. These include the addition of cream and sour cherries or strawberries to Alì babà. The name was soon shortened to simple babà and inserted as a typical Neapolitan dessert in the first manual of Italian cuisine signed Vincenzo Agnoletti.
A long journey then, which saw a cake born from the Polish genius and perfected in France, becoming a symbol of being Neapolitans, as well as one of the most loved dishes in the world.