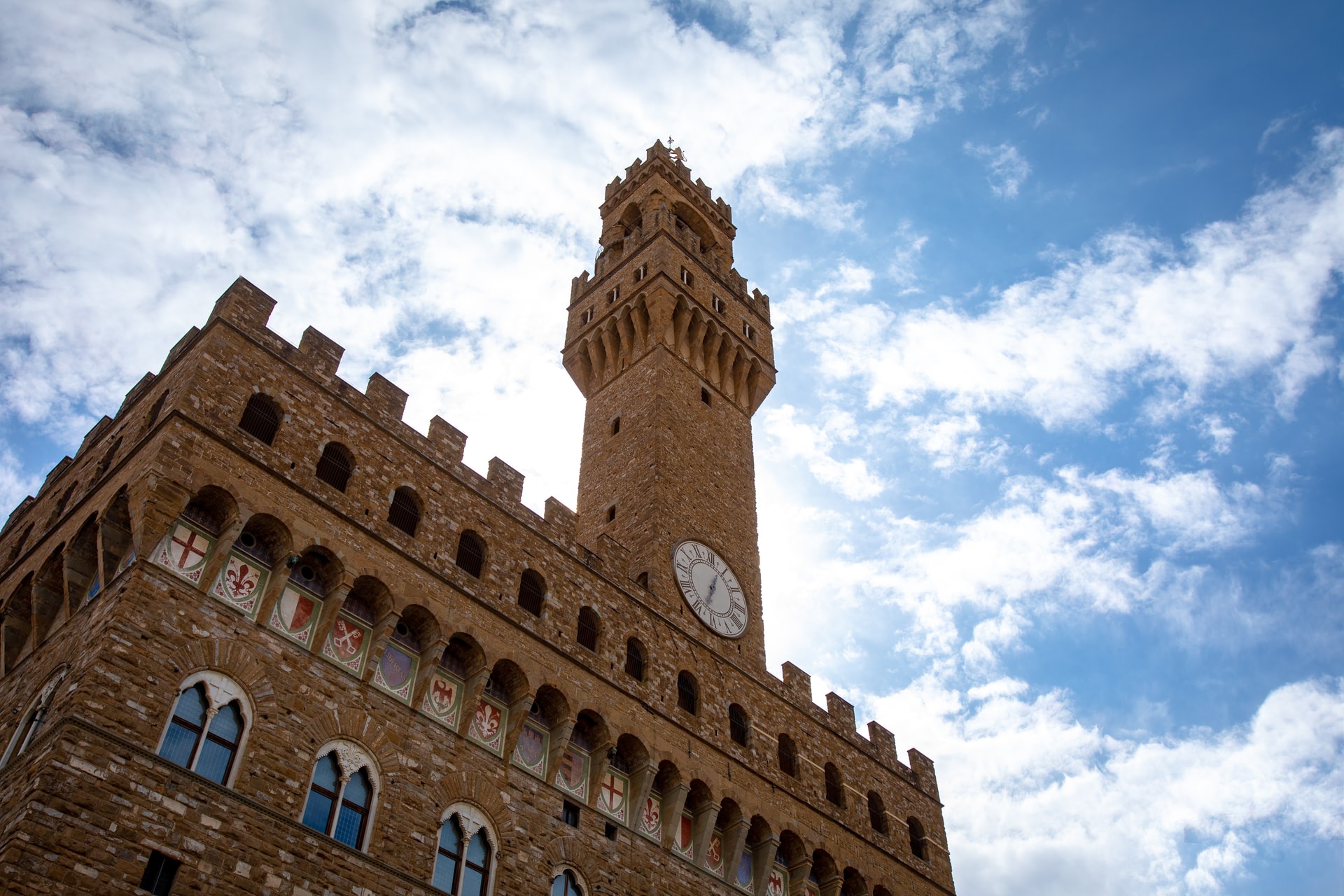 Palazzo Vecchio in Florence, a jewel of Italian art

Palazzo Vecchio is one of the most fascinating places in Florence, a real jewel of Italian art, where history, beauty and mystery melt. Located in Piazza della Signoria, it hosted the Parliament of the Kingdom of Italy (1865 – 1871), but now it’s the seat of the Municipality of Florence, as well as a very valuable museum. Built in the 13th century, it has undergone numerous changes over time, also taking on different names.

It was at the beginning Palazzo dei Priori, but it became della Signoria in the fifteenth century (taking the name of the main body of the Republic of Florence). In 1540 it was Palazzo Ducale (when Duke Cosimo I de’ Medici moved there). It has been Palazzo Vecchio since 1565 (because in that year the Duke’s court moved to Palazzo Pitti).

Political symbol of the city, it has the appearance of an imposing Gothic-style fortress. Inside, it’s enriched by magnificent courtyards, by a monumental staircase built by Giorgio Vasari, by masterfully frescoed Renaissance rooms and halls. The building is attributed to the architect Arnolfo di Cambio, who began building it in 1299, it was built to house the Priors and the Gonfalonier of justice (the supreme governing body of the city), therefore to ensure effective protection for magistrates in periods of turmoil and, at the same time, celebrate its importance. When Arnolfo died, the palace was completed by two other masters in 1314.

The building is built in local stone and is crowned with a crenellated parapet supported by small arches and shelves. On the facade there are a series of coats of arms, testimony of medieval Florence and its balance of power. In front of its entrance you can admire the marble statue of David by Michelangelo (the original is kept in the Galleria dell’Accademia), together with copies of those of the Marzocco (an heraldic lion) and Giuditta e Oloferne (the original is found today at the Bargello Museum), both masterpieces by Donatello.

Palazzo Vecchio, built on the ruins of an ancient Roman theater

Built on the remains of a palace that belonged to the Uberti Ghibelline family, defeated by the Guelph faction after internal struggles and driven out of the city in 1266, Palazzo Vecchio rests its foundations on the ruins of the ancient Roman theater of Florentia (1st century AD). They are still visible along a circuit that winds through the underground level of the building, whose excavations continue to reveal remains from different eras. There are several entrances to access it, including the Porta della Tramontana, the Porta della Dogana and the Porticciola.

The imposing tower, on the main facade of the building, dates back to 1310 and hides a cell (called the Albergaccio). This was a place of imprisonment for Cosimo de’ Medici, sentenced to exile in 1435, and Girolamo Savonarola, executed as a heretic in 1498. About 94 meters high, it’s one of the unmistakable symbols of Florence.

Going up the 406 steps leading to the top, you can access the ancient walkway. From here you can admire the wonderful panorama of the city. A real sight for the eyes. The tower is not exactly in the center of the building. Arnolfo built it on another pre-existing one, belonging to the Foraboschi family, called “della Vacca” because of the nickname that the Florentines gave to the large bell that surmounted it.

Since Cosimo I de’ Medici and his wife Eleonora of Toledo made their residence in the mid-16th century, they have undergone a substantial transformation. Making use of the collaboration of great artists, the building was enlarged to double its size. Internally, the palace began to become an architectural jewel, largely thanks to the work of Giorgio Vasari. The artist was also responsible for the design of the Salone dei Cinquecento, the Studiolo of Francesco I, the Eleonora district and the Elements district. In this which today is one of the most beautiful and visited museums in the world, works by the likes of Michelangelo Buonarroti, Donatello, Verrocchio are on display.

One of the most spectacular halls in the whole palace is the Salone dei Cinquecento. 52 meters long and 32 wide, it was built in 1494 by Simone del Pollaiolo, commissioned by Savonarola. The latter was the spiritual leader of the Florentine Republic who had replaced the Medici after their exile. Initially the hall was the seat of the Grand Council, composed of five hundred members, then of the court of Grand Duke Cosimo I. During the extension works, carried out by Giorgio Vasari, some works were lost, such as the Battle of Cascina and the Battle of Anghiari, painted by rivals Michelangelo Buonarroti and Leonardo da Vinci.

In fact, both works remained incomplete. Traces of it are still sought in the interstices behind the paintings of Vasari and his team. The same frescoes that he painted in the Hall hide secrets: a detail of the Victory of Cosimo I in Marciano in Val di Chiana bears, at the top and barely visible, the word  “cerca trova” – “searchs and finds”, the meaning of which still remains unknown. The coffered ceiling is made with 39 panels built and painted. Both the wonderful frescoes that decorate it and all the decorations in the room, are rich in symbols and religious references and were intended to enhance the grandeur of Cosimo I and the Signoria.

There are many more beautiful hall that take their name from the lords who made the Medici dynasty great in various eras: Lorenzo the Magnificent, Leo X Pope, Clement VII Pope, Cosimo the Elder, Cosimo I, Giovanni dalle Bande Nere, the only leader of the house doctors. The museum is full of places to visit, including: the Cappella dei Priori, which welcomed Fra ‘Savonarola in prayer; the Sala dell’Udienza and the Sala dei Gigli, richly decorated with works by Benedetto da Maiano, Ghirlandaio, and wooden doors with the representations of Dante and Petrarca.

But also the Stanza del guardaroba – dressing room – where the Medici kept their most precious possessions, where today you can admire geographic maps of great interest and a famous world map. Another known place is the Old Chancellery, which hosted Niccolò Machiavelli in the period in which he was Secretary of the Republic. Last but not least, the so-called Mezzanine, where the Charles Loeser Collection is visible. Palazzo Vecchio is therefore one of the most extraordinary monuments in Florence, which contains a very precious part of the history and art of the city. Not only. It is a mysterious place, which also hides secret passages inside. In short, a palace of great charm and culture, to visit absolutely.