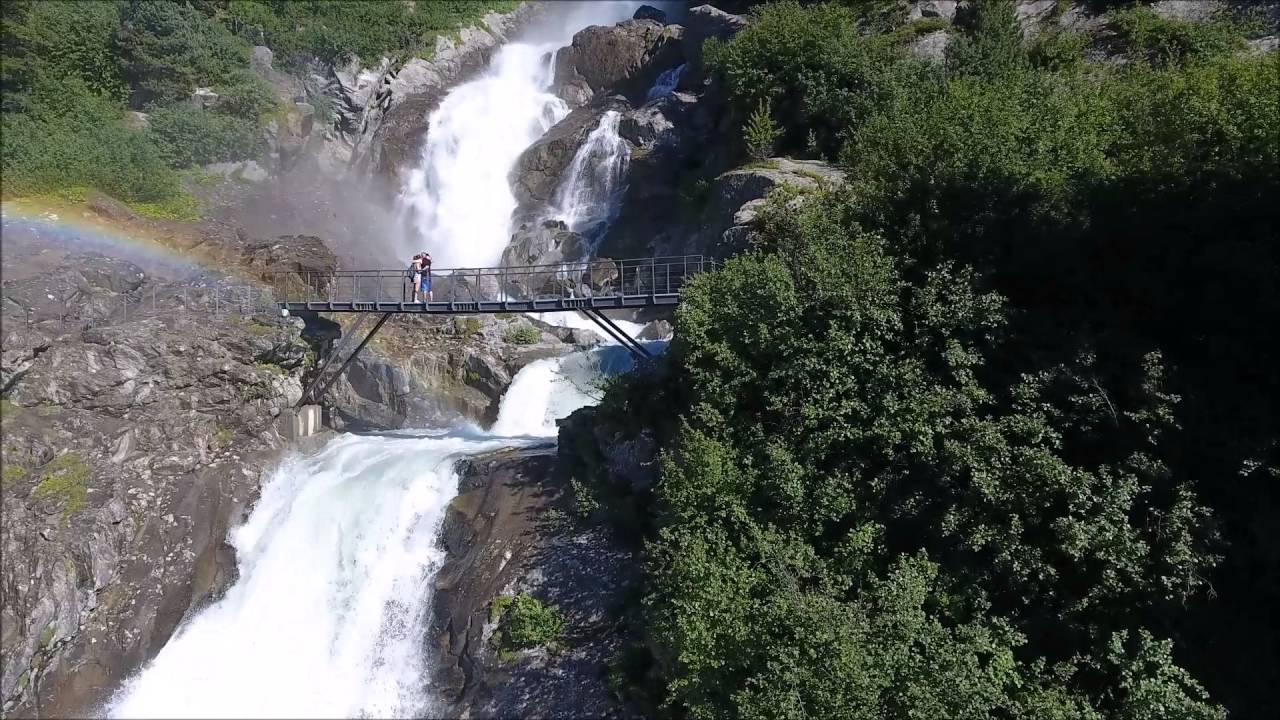 The Rutor waterfalls, one of the wonders of the Val d’Aosta

The Rutor waterfalls are one of the most evocative landscape corners of the Val d’Aosta. They are born from a stream fed by numerous lakes close to the Rutor glacier, the sixth in Italy, from which the waterfalls take their name.

The Testa del Rutor (3486 m) is located in Valgrisenche, a small valley in the Val d’Aosta area characterized by many small lakes. La Testa del Rutor is a sort of ‘privileged balcony’ from where the view can range from the Mont Blanc to the Gran Paradiso and to the Mount Rosa.

The Rutor waterfalls, a magnificent natural spectacle in the Alps

To admire the beauty of this extraordinary naturalistic scenery you can walk along the path that from La Joux leads to La Thuile. Among the conifer woods, after about twenty minutes of walking along the mule track, you arrive at the observation point of the first waterfall at 1700 meters high.

Continue through the woods until you reach the Baita Parcet (1,772 m). Then continue uphill along the path until you reach the second waterfall located at 1,850 meters high. After a few hairpin bends the hiker also finds himself in front of the third waterfall. Near a crossroads that offers the possibility of reaching the Deffeyes Refuge (2.494 m) or diverting towards the Bellacomba Lakes.

The Rutor waterfalls and the glacier that feeds them

The Rutor glacier dominates the valley and can be admired from any perspective. With its 8.4 square kilometers, it is the third largest in the Val d’Aosta after the Miage (10.6 km2) and the Lys (9.6 km2). The glacier forms a large cap that from the Testa del Rutor descends to a height of 2,500 meters, feeding some lakes. 150 years have passed since the sudden emptying of the Lake of Santa Margherita, which led to the last flood of the town of La Thuile.

On that occasion the front of the glacier withdrew definitively from the shores of the lake in 1864. Since then the lake has no longer been blocked by ice and the melting waters of the Rutor have started to flow regularly downstream, generating the beautiful spectacle of the waterfalls. In ancient times, in the month of July, the population of La Thuile went up in procession to the glacier to pray and avert other possible floods.

Excursions through woods, paths and waterways

For Saturday 20 and Sunday 21 July there will be excursions, one on the glacier and the other on the Valgrisenche. The two days are organized by Cai (Italian Alpine Club). Of course the naturalistic itinerary also includes a stop at the Rutor waterfalls which are among the most beautiful in the region.

Three impetuous jumps of water that are thrown between gorges and precipices, giving life to the Dora del Rutor. Those who want to enjoy an even more impressive view can get on the bridge of the third waterfall, inaugurated in 2014, for the 150th anniversary of the birth of the falls. The two-day itineraries include routes for adults and also for children.