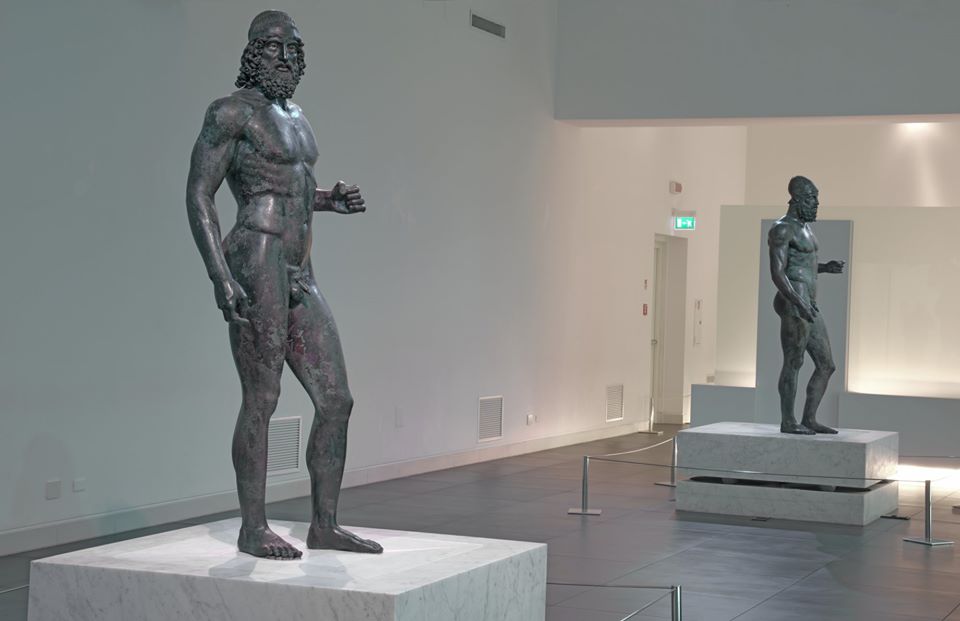 Riace Bronzes, a new study reveals: “they were five and blond”

Who knows how many of you have gone to admire them. Because in their grandeur and uniqueness they arouse amazement and wonder in the viewer, as unique masterpieces of art that have come down to us. But now new research could reveal other secrets. We are talking about the Riace Bronzes, the two large statues kept in Reggio Calabria and found at sea 48 years ago, on August 16, 1972. According to new research, however, the statues would not have been two, but five and would have had the blond hair. Let’s find out some details about this curious new investigation.

Riace Bronzes, the study of a Numismatics teacher

To rewrite the history on the Riace Bronzes is a scholar, Daniele Castrizio, full professor of Greek and Roman Numismatics at the University of Messina. He is also a member of the scientific committee of the MArRC, the Archaeological Museum of Reggio Calabria where the two statues are located. According to the teacher, the two warriors were made in Argos. The clay used for the models proves it. According to Castrizio, they were part of a statuary group that would have represented the moment before the fratricidal duel between Eteocle and Polinice, brothers of Antigone. Hypotheses that would find confirmation on literary and iconographic sources. The teacher collaborates with the Carabinieri of the Heritage Protection Unit in investigating the possible disappearance of helmets, shields, spears.

“Riace Bronzes were blond and golden and were made in Argos, in the Greek Peloponnese – the professor explained to Agi. Both in the mid-fifth century, a short time distance from each other, in the same shop but by different workers. It was understood that B corrects A’s errors, which still remains the perfect statue in the bronze casting technique among those that have come down to us from antiquity”.

Mysteries around the Riace Bronzes

Over the years there have been many studies on the Riace Bronzes. As well as the mysteries around these large statues. A mystery: how the Bronzes appeared in ancient times, where, when and by whom they were made. And we still wonder what they represented and how many there were. Finally how and why they ended up in the waters of Riace. Technology is trying to help the studies and therefore try to give answers to these great art puzzles. The new survey equipment is trying to scan the seabed to find the wreck. “We are already at this very advanced stage – explained Castrizio. Until a few years ago, we knew almost nothing and we were groping in the dark of hypotheses, now we are even circumscribing the precise point where the earth was taken”.

Teacher reveals other interesting details on the use of clay and therefore the origin. “The two bronzes, for which different dates had been proposed on a stylistic level and with differences of up to 50 years – he explains -, are practically the same age. We are in the middle of the 5th century, the clay is the same for both and comes from two quarries in two very close places. The workshop could only be in Argos where Pythagoras of Reggio was active, the bronze artist considered by Pliny to be among the best, with Phidias, Mirone and Polycletus, in whose workshop his nephew Sostrato worked, who continued the work”.

Other curiosities about bronzes revealed by the new research

It is undoubtedly a novelty relating to color. In fact in the Greek age the statues appeared blond and golden, in the Roman age they were shiny black. “Glossy black – adds Castrizio – is the color they assume after the restoration they underwent when they were transferred to Rome. The Bronzes were originally probably exhibited in Argos, but after the conquest of Greece and the looting of 146 BC. by Lucio Mummio, were brought to the capital and exhibited here at least until the 4th century AD”.

And again from the studies it emerged that the two statues had the lacrimal caruncle, made with a pink stone placed between the eyes and nose. “It is not uncommon in ancient statues. Even the Kouros of Reggio or the Head of Basel have blond hair and beard – says the scholar -. In chryselephantine statues, that is, made of gold and ivory, it was normal. In the Naples Museum we have a marble Aphrodite with remains of color in her hair: she is blonde”.

Secrets of their origin

From the studies and historical reconstruction, provided by the team of researchers, the two statues depict Polynice and Eteocles, brothers of Antigone, who compete to a duel for the throne of Thebes. And to confirm this hypothesis would be the literary sources cited by the scholar. Furthermore, according to Castrizio, the Bronzes together with other works of art were on their way to Constantinople in the 4th century AD. Who knows then why they were in the waters of Riace. Perhaps the sailors forced to discard much of the cargo or the ship would sink. So maybe the new investigations on the seabed will allow this other mystery to be revealed.