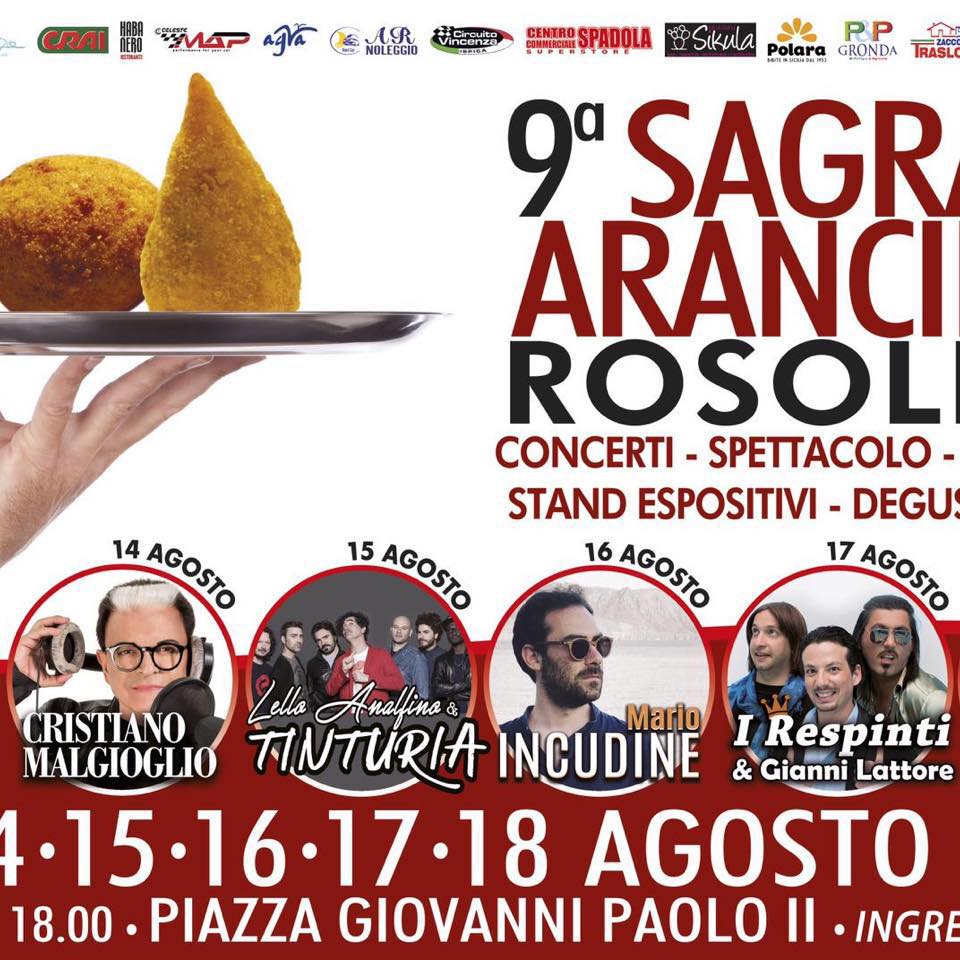 Rosolini’s arancini, a festival of taste and tradition

The arancini or rice balls are synonym for “Sicily” and they bring culture, gastronomy and refer to timeless cultural traditions.

The aroma of the arancino, and the skill with which it is prepared, is also synonymous with Rosolini, where “the arancino” reigns undisputed.

The arancini bring in dowry and pass on to Rosolini, a festival, which is a riot of smells; that swarm fragrant in the streets. Rosolini is located in the province of Syracuse, an ancient land that honors every year the “king” of the Sicilian table. This celebration takes place from 13 to 18 August, with a marathon that sees every variation of Sicilian arancini. This year the ninth edition of the event will take place.

It is one of the most anticipated events of the summer, which is enriched from year to year and attracts more and more gourmets. There are many tourists who take the opportunity to visit the beautiful Rosolini, a feudal village, an ancient Syracusan colony. The ancient vestiges of the ancient “Rus Elinorun”, dating back to the century VII BC, known as the “City of the Carob”, has much to tell. Ancient walls and footprints dating back to the mid-fifteenth century, linked to the marriage between Antonio Platamone and Margherita De Podio.

Margherita donated the Cugni d’Incumbao fiefdom, better known as Li Salini. It is now the tourists who go to the Arancino festival, they can also visit a beautiful archaeological site, at “Stafenna”, a fascinating complex of early Christian hypogea. It is possible to be swept away by the smells of the Mediterranean maquis, to Cava Pirainito, where a small stream creates spectacular waterfalls.

All of Rosolini is surrounded by the countryside which is predominantly colored by the very fragrant cultivation of citrus fruits, almond, olive and carob trees. But once again, as has been the case for almost a decade, the highlight of the Rosolinese summer is the festival of this rice-based delight. Music, folklore, shows, tasting of typical local products, will frame the whole. Just immerse yourself in the atmosphere, and immediately find yourself in the culinary realm of gluttony, where as if by magic, the protagonists of the evenings will appear; conical rice balls, stuffed with every good of God.

Rosolini, city of the carob tree and the arancini

Arancini, spouses who bask in an oil that is blond and enveloping, make the joy of all the participants. A dream with eyes, even with an open mouth, organized by the “Eventi Sicilia” association. The program includes an opening with a press conference, musical entertainment and even tasting of the classic Sicilian and Muscat cannoli.

Saturday 17th August, opening of the stands, performance of dance schools and musical groups. At 10 pm I Respinti and Gianni Lattore will perform. The festival ends on Sunday 18 August with a Stand opening from 18.00; prformance of dance schools and musical groups. Finally, at 10pm, Carlo Kaneba and Antonella Cirrone will perform; Paolo Meneguzzi Tour 20 Summer.